You Need To Learn To Say NO. 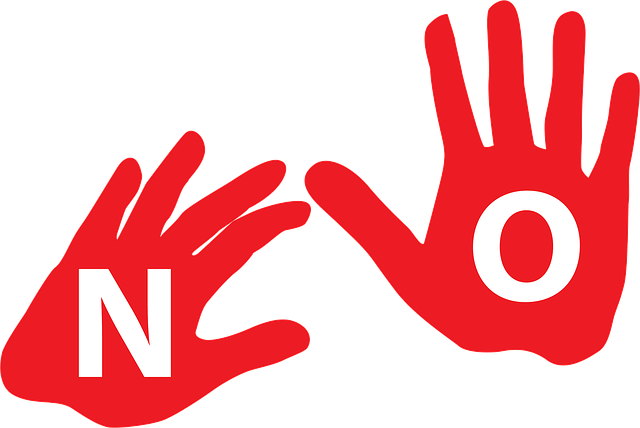 I enjoy meeting people and being hospitable, and the Word commands us to do that (Romans 12:12-14).

However, there may be times when, no matter what the tradition has been, or what a family member expects or thinks about it, that you must say “No” to them.

I encountered this very recently when a relative who lives several states away just decided she would come down and visit, arriving when she wanted and leaving when she wanted. She was supposed to come down for an important family event, but insisted she stay with us, instead of getting a hotel.

This woman has flown all over the world and does what she wants pretty much when she wants. She has no children, and I suppose, no current job.

There were many reasons for this. The main one, however, was that, although I had tolerated her and her husband doing this at Christmas time, even though it disrupted several things, I knew deep within that I did not need to allow that this time. It is a new season for my husband and me, and there had been many challenges we had been working through, knowing God is faithful and good forever.

I do love both this relative and her husband, and, at Christmas, my husband insisted they stay no matter what I thought about it, even though they made the schedule they wanted and we had to work around it. However, we were both blessed to be off for the holidays while they were in town, so things worked more smoothly than they would have if we were working.

I still had to ask the LORD to help me adjust spiritually and emotionally. It is good to be unselfish and giving, and showing hospitality is an excellent way to do that.

However, my privacy was invaded and I did not have the freedom to be with the LORD as usual. Since our daughter had grown up and went to college years before, we had become quite accustomed to having the house to ourselves and I had created a prayer room in my office, where I had things that were just between me and the LORD.

This time, I knew that, for many reasons I won’t go into, I did not need to have the spiritual atmosphere interrupted by having a person in my home, especially while my husband and I were working.

Before and after work, we both spend time with the LORD. We do pray together, but we personally spend private time with Jesus. We value that time very highly. It has taken years to get to this place, but it is so worth it!

There is nothing like private time with the LORD!

So, knowing that if the relative came, our private time would be interrupted, and that, because we were both working outside the home now that our private time with each other and especially the LORD was more valuable than ever, knew the Holy Spirit was instructing me to just say “No.”

Although the devil and my mind was trying to tell me I was being selfish, I could not get peace about saying “Yes” to her.

I had learned through the years to overcome other humans’ opinions and go with the One Who loves me and knows my life from the beginning till the end.

The Holy Spirit, Who is the Spirit of Truth (John 16:13), knows all things. Every time I have trusted Him and what I knew He was helping me know in my heart–no matter what the circumstances seemed like, nor what others said–I was thankful, protected, and blessed.

Thank the LORD that, when Jesus went to Heaven to be with the Father until His return, He sent the Counselor, the Comforter, the Helper (John 14:26) to us!

So I decided to obey the LORD and expressed that to my husband, reminding him of other times when we had had to say “no”–even to our daughter–and that it was all right. It had been hard at the time, but it was the right thing to do. Even our daughter had later admitted the wisdom of our decision, and decided to respect it, which is when the relationship was reconnected.

Even if others did not understand, I told my husband, and judged us, they were not responsible to the LORD for our decisions–but we are.

After all, I also told him, if we did not allow demons or other unwelcome guests to stay in our home, why would we allow this?

We had both grown spiritually since Christmas, and as I expected him to (trusting God ultimately to guide my husband’s heart), he honored that request.

I told him a few things that would test the relative’s maturity to see how she would respond, knowing that she would most likely be offended. I don’t like to offend others, but when it comes down to it, if they are offended, it is because they choose to be.

So I asked my husband to tell her that we would be happy to take her to the event, but that she needed to get a hotel for however long she wanted to stay in town.

She was first offended because he discussed the matter with me, his bride, instead of just telling her “yes,” as he had at Christmas. She had not wanted me to be privy to the conversation. But as any good husband should, he not only showed me her emails and his replies, but told her that as Covenant marriage partners, we discussed everything.

Unfortunately, as I expected, she bemoaned the fact that, since she was flying, she could not afford a hotel. The event was only one day. She had decided, without consulting us, that she would stay three days.

Anyway, she was offended and decided not to come.

As I also told my husband, if she truly wanted to come to this event, she would make a way–as she had made a way to travel the world for years and even living in foreign countries in the bush.

I find no fault in her and pray this lesson will help her understand to be more considerate of others. Only the LORD can help her with that.

Meanwhile, I have and continue to have peace, knowing that, for many reasons, I was supposed to say, “NO.” This test has strengthened our marriage too. Unity, trust, and openness is vital in marriage, and I pray this lesson will also help her strengthen her own marriage.

I will also continue to guard and enjoy my private time and place with my LORD, my Greatly Beloved Jesus Christ, Who saved, delivered, and healed me (John 3:15-17), and continues to bless my life more every day!

Ask the LORD for wisdom and courage to say “No” when you need to. He knows all things, and always has the best Plan for you. He always has your back!

Tonja K. Taylor is the author of many works, including THE ADVENTURES OF PRINCESS PEARL, P.O.W.E.R.* Girl! series. She and her husband Clayton minister the Word through teaching, preaching, and the arts, on River Rain Creative Arts (You Tube, God Tube), AnchorFM, their church, and the region.

Facebook
Twitter
Pinterest
WhatsApp
Previous articleBest Friends Of 17 Years Just Found Out They Are Biological Sisters
Next articleAre There Alternative Sources to Fend Off the Coronavirus?