Why America is On The Decline 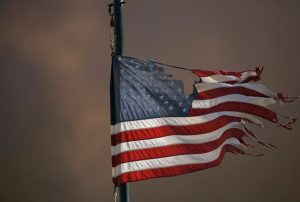 We live in historic times in America. The Left is in a full-scale war against a sitting President. Socialism is in vogue, thanks to Bernie Sanders. College campuses are social re-education camps, and young American’s everywhere are sure life isn’t fair. Suddenly being offended, the current fad, is as popular as the Pet Rock used to be. Our descent to Third World status is reaching warp speed.

The people we elected to protect our rights, enforce our Constitution and keep us safe from our enemies are doing none of it. Instead, they vote themselves raises, pensions and exempt themselves from the very laws they enact upon we the people. A neighbor of mine growing up told me that if the only tool you have is a hammer, every problem looks like a nail. Our elected officials, the elite, who now rule us and pander to the world money men, think every problem in America has a legislative solution, their nail. The lawyers see more law as the solution to everything from healthcare to conducting a war or dealing with child abuse. So what is the unspoken secret, the root of the problem?

Bernie Sanders, a Socialist who would have been the Democrats selection for President albeit for some crooked politics, was sure it was more money and a government that takes care of everything. Is that the secret? In the past year, the Department of Health & Human Services, HHS, spent $1.1 Trillion on we the people. That is nearly $9,000 for every single citizen. The latest statistics show we have 41 million people on welfare. Are programs and money going to solve the problem? Based on results, apparently not? The ‘war on drugs’ is working well.

How bad are the problems? A new Kindergarten teacher I talked with a year ago told me she found two little boys, who were missing from her class after recess, performing oral sex in the bathroom. And yes, it was at what the community considered to be one of the ‘good’ schools. What exactly will a new program do for this problem? More importantly, where did a Kindergarten student learn about oral sex? What happened to morals?

A few years back I was speaking to students at a local high school. The school invited me to come in and discuss the Vietnam War. They set me up in the library, with tables for the students, and cycled in about thirty at a time for three days. The school was 50% Native American. As each class entered, their teacher sat in the back, and all Native American students chose to sit on the floor, under the table with their backs to me. I looked at the teacher each time, some shrugged their shoulders, others looked away, and I went on. What happened to respect?

If you talk with teachers today, you’ll be horrified at what goes on in our schools. Elementary kids are showing up with no coats in the dead of winter, meals before, during and after school. Teachers are expected to be Mother, Father, and Cop. The Superintendents are much like our elite in Washington, staying far removed from the action and above the fray. We spend $112 billion a year on a Department of Education that is primarily responsible for adding more and more regulations that require more time for teachers and more money spent on non-teachers. America spends more money per pupil than any other country on earth, except Luxomberg, a tiny financial capital in Europe. We rank only average in the world in reading and science and below average in mathematics. What happened to American education?

How is all this working out for our kids? Our test scores are an indicator that the future may not be so bright. How do we treat our children in this new, fast-paced world of the future, full of equality at any cost and social justice as a vocation? We had 1.3 million homeless kids attending public school last year. At least they are in school, how many are there we don’t know. Do you know that in 2015 nearly five children died every day in America from child abuse? 80% are under three years of age. In 1998 that number was three killed per day, with over half abused more than once, and roughly 80% of those abused are by parents. I’ll stop there on the little ones; it only gets worse.

What happens to our kids as they age, outside of abuse that is. Do you know that young people 12-20 years old consume 11% of all alcohol sold in our great Nation? Over 11 teens die each day from alcohol, and over 550 teens visit the ER every day due to alcohol. 35% of 12th graders drink and 10% drink and drive. 8% of 8th graders drink and 4% of 8th graders admitted to binge drinking. And then there are drugs.

A recent survey says 3,300 new students try pot every day. Of course, the Left would have us believe it’s okay, legalize marijuana. According to Recovery Village, 10% of A students smoke pot while 48% of D & F students do. In their findings pot lowers your IQ by at least 8 points. Besides allowing you not to have to deal with the big bad world.

In studies on the availability of drugs in our schools, high school students across the country responded, 91% of those surveyed said pot was readily available, another 24% said prescription drugs were no problem, 9% said cocaine was available, and 7% knew where to get Excstacy. Our ‘social experiments by FDR & LBJ et al., don’t seem to be working?

So what is the unspoken secret? I think John Adams nailed it in 1778 when he said, “The foundation of national morality must be laid in private families… In vain are Schools, Academies, and Universities instituted, if loose principles and licentious habits are impressed upon children in their earliest years. The vices and examples of the parents cannot be concealed from the children.” Mr. Adams could be talking about today. Another wise man many years ago said, “No success can compensate for failure in the home.” Therein lays the unspoken secret, the destruction of the family.

The home is the key to a stable nation and producing productive adults. The home is where you learn morals, values, and accountability. The destruction of the family began many years ago. The root of its beginnings and its sustaining energy today comes from the Left. Democrats, Progressives, Liberals, whatever they call themselves today, are bent on destroying the family? We need only look to the Democratically controlled cities of Washington DC, Detroit or Baltimore for shining examples of family destruction.

As I write this word comes in of another school shooting in Florida. Multiple casualties, several dead and the never-ending question of why? There’s no easy answer to that one. I do know the root cause comes from the destruction of the family unit. The first school shooting was in the 18th century when Indians attacked a school. The 19th century saw 28 school shootings and the 20th-century shootings were 226. So far, including the most recent Florida shooting, there have been 212 in the first decade and a half of the 21st century. At this rate, there will be 1,642 school shootings in this century. It’s not the guns, they’ve always been around. It’s the madness that has become our society.

What is driving the assault on families? Many things but a look back to January 10, 1963, when these folks were then known as Communists, gives us a clue. On that date a wise member of Congress, Representative A. S. Herlong of Florida read into the Congressional Record-Appendix, pp. A34-A35 the then current Communist Party goals. There were 45 in all and the two below; I think you would agree, have been accomplished quite well.

40. Discredit the family as an institution. Encourage promiscuity and easy divorce.

A loose coalition of communists, socialists, progressives, and Marxists have been chipping away from the inside out for many years. They have taken over the Democratic Party, most of the Republican Party and thanks to 8 years of Obama, the institutions that make up our federal government. Marxists control nearly every college campus in America and wield more than a small influence in our nations school system. It’s an ideology; the conspiracy is among the worlds elite money men.

The question at this point in the war, and we are at war, is what will you do about it now that you know. The secret is out. Every problem listed above is the result of the destruction of the family and the elimination of the Judea Christian values of our nation. There is no amount of money in the world that will solve the lack of moral fiber we now face. And morality cannot be legislated, in spite of the current wave of attempts from the Left. The time is now.

Henry David Thoreau once said, “There are a thousand hacking at the branches of evil to one who is striking at the root.” Are you going to pick up your ax and strike at the root? Or are you going continue hacking at the leaves as you sit in front of the big screen? We still have freedom of choice in America; the choice is yours.

Ed Kugler is a former Marine sniper with two consecutive tours in the Vietnam War. He is also a former atheist and now a Christian. He has been changing for a lifetime. He is a recovering alcoholic, successful business leader who made it to VP of Compaq Computer with no college degree, flunked high school English and has written six books. http://www.edkugler.com.