Watch What You Watch 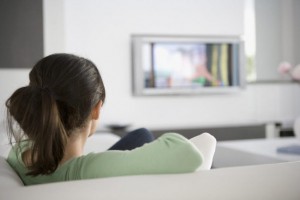 Sherry switched off the television and glanced at the front door. Good thing Mom isn’t home yet, she thought. She’d never let me watch that program! Sherry went into the kitchen, poured herself a tall glass of chocolate milk and sat down to work on homework. She sighed, if only her life were more like the girl in that TV show, Angela.

In many ways, the show reminded Sherry of her own family. She too had an older brother and two little sisters. But Sherry’s parents were much stricter than Angela’s. Angela had her own room and a boyfriend, too. She had so much independence, and her parents weren’t always asking her where she was going, if she did her homework, how much of her allowance she was saving or forcing her to go to bed at 9 p.m. every night.

The final scene from a recent episode replayed in Sherry’s mind. Angela’s mom had asked her to do the dinner dishes. “Who do you think I am?” Angela had smarted back. “I’m not Cinderella! I don’t want to do the dishes; it’s not fair that you’re always making me do so many chores!” With that, she had stomped out of the room, run upstairs and slammed the bedroom door.

Just then, the garage door groaned open. A few minutes later, balancing three bags of groceries and fumbling with her purse, Sherry’s mom struggled to open the door and get inside without dropping anything.

“Sherry, could you get the door please?” she asked. “And if you could help me carry in the rest of the groceries and put them away, I’d be grateful.”

Without thinking, Sherry rolled her eyes. “Mom! I just sat down to do my homework.” Her voice came out whiney. “Can’t Joel help you with that? Why do you always ask me to do the work?”

Suddenly, the heaviest bag, dangling from her mom’s right wrist, ripped open spilling hamburger and swiss cheese all over the floor. With a deep sigh, Sherry’s mom knelt to clean up the mess. Sherry didn’t move to help.

“Sherry, I don’t know what’s gotten into you, but I don’t like the tone of voice you’re using with me or your poor attitude. I need you to get up right now, help me clean this up and do what I asked. We’ll talk about your attitude later.”

That evening, Sherry’s mom insisted that everyone stay seated at the table after dinner. “I want to have family devotion in here tonight,” she said. She pulled her Bible off the shelf and handed it to Sherry. “Sherry, will you please read Genesis 30:37-39?”

“Then Jacob took some fresh branches from poplar, almond, and plane trees and peeled off strips of bark, making white streaks on them. Then he placed these peeled branches in the watering troughs where the flocks came to drink, for that was where they mated. And when they mated in front of the white-streaked branches, they gave birth to young that were streaked, speckled, and spotted.”

Sherry finished reading and looked up at her mom. “What does that mean?” she asked.

“This story can seem kind of confusing,” her mom began. “But I think it has a lot to teach us about being careful what we look at. When Jacob placed the striped and spotted branches in front of the sheep, it affected what they looked like. Their lives were impacted by the things they watched and were exposed to.”

“I think I see what you’re saying,” Sherry spoke quietly.

“The Bible also tells us to be careful about the company we keep,” her mom added. “We become like the people we spend time with.

“Even if we don’t think so, everything thing we watch and everyone we spend time with affects who we become. That is why your dad and I care about what you watch on TV, the friends you have and the places you go. We want you to become more like Jesus, not like the world.”

Sherry hung her head. She could see how her new favorite TV show was already affecting how she acted toward her family.

“Mom,” she said, “I’m sorry for the way I acted this afternoon. That was very disrespectful. And I have a confession to make, too. There’s a show I’ve been watching after school sometimes before you get home. I know that it’s not a good show, it doesn’t teach me to honor my parents and be kind to others. I’m sorry. Will you forgive me?”

In this season, Abby Kelly is exploring and enjoying her introverted side! She loves long walks with her dog, reading, writing, crocheting and studying the Bible. Visit her website: http://www.predatory-lies.com. Find her book on Amazon: http://www.amazon.com/Surviving-Predatory-Lies-Anorexia-Kelly-ebook/dp/B00HFGMBJA/ref=sr_1_1?ie=UTF8&qid=1389645006&sr=8-1&keywords=predatory+lies.

Facebook
Twitter
Pinterest
WhatsApp
Previous articleFate of abducted Missionary Phyllis Sortor still in limbo
Next articleAll that glitters is gold in The Palace of Versailles, France