The Remnant featuring Penn State and the Profits of Sin, Based on a True Story and more 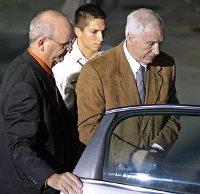 Penn State and the Profits of Sin

In June a jury found Sandusky, 68, guilty. Others complicit in the abuse were Paterno (who persuaded officials to stay silent), former university president Graham Spanier, two other university executives, a graduate assistant, campus police, and a janitor. None spoke up for the voiceless, vulnerable children. No one in authority lifted a finger to stop it. Paterno continued to stride onto the field, accumulating wins. The university and community of State College continued to boast, “We are Penn State!”

Martin Luther said, “He who accepts evil without protesting against it actually participates in it.” So who all is to blame? Most agree that the guilty have received their just deserts, and yet others have decried the sanctions because they would adversely affect “the innocent,” the industries that profit from Penn State football.

“Hours after the NCAA sanctions were announced,” the Philadelphia Inquirer reported, “merchants along College Avenue and the many downtown side streets maintained a stoic yet stunned silence as they tried to process how the actions would affect their bottom lines.”

Does anyone else bristle at this cry for protection of the football-consumer culture? Does anyone else feel sick when reading the Paterno family’s reaction to the sanctions: “The idea that any sane, responsible adult would knowingly cover up for a child predator is impossible to accept. The far more realistic conclusion is that many people didn’t fully understand what was happening and underestimated or misinterpreted events”?

Didn’t fully understand? Underestimated? Far more realistic? The reality is that adults routinely sweep the brutal abuse of children under the rug. They know what is going on, but are too fearful of what it could mean for them to act and protect those children.

The greater reality is that the deception that perpetuates abuse cripples not only the children who are direct victims but also swaths of families, relationships, churches, and communities. Sin never affects one person. We should grieve for the pure of heart in State College who are suffering the consequences. We should pray for restoration. We should feel sorry for them. I grew up in Pennsylvania; I get it. I understand.

Yet sin is like a toxin injected into the body; it spreads and the body absorbs it. Although Jesus’ work on the cross has released believers of sin’s control, it has not insulated us from sin’s natural consequences. When I hear a community bereaving its bottom line, I want to vomit. In light of those children … are you serious?

Jesus said, “But whoever lives by the truth comes into the light” (John 3:21). Now that this scandal has surfaced, shouldn’t we continue to walk in the light that says idols—be they football or pride or one man’s legacy—should be destroyed at all costs? Unfortunately, we always pay for the sins of others, and others pay for ours.

I guess I am wishing that those worrying about how they’ll stay afloat financially because of the repercussions of these sanctions would do as the Penn State officials did—remain silent. Where they erred, State College residents can do right—they can stop thinking about themselves and think of the now-grown children who will grapple with the residue of the abuse long after the community bounces back and is in the black, chanting, “We are Penn State.”

Based on a True Story

It was a spectacular testimony. Horrific abuse; a broken lifestyle; encounters with the rich, the famous, the villainous; daring exploits; a stunning escape.

Others have featured this testimony, including major television shows in the secular and Christian spheres. The individual in question has spoken at multiple conferences.

I sent a trusted reporter to interview her, and I said what I always do when we encounter amazing testimonies: See if you can independently verify some pieces of it. Listen carefully, observe closely, and don’t be ashamed of being skeptical. We want to be mindful of the people we feature in this newspaper, because we represent the cause of Christ. I know from many years of experience as a reporter that everything isn’t as it seems.

Well, our reporter listened, and her antennae pricked early. So many incidents in the individual’s life bore a striking resemblance to scenes in well-known movies, and indeed, the person displayed a fascination with Hollywood, citing parallels to multiple major releases. Then our reporter noticed that, under questioning, the individual backed away from a few stories and declined to offer details.

The reporter and I compared notes afterward, and we noticed a common thread in the individual’s amazing tales: Every single one of them was 100-percent unverifiable. There was no way you could determine if any of these incidents was true or false.

We dumped that story like a barrel of radioactive waste.

Personally, I don’t believe any of it. (But I can’t prove it’s false, either.)

I wish I could say this is the first time I’ve reached this conclusion as editor of MannaEXPRESS, and that I am shocked—simply shocked! But I am not. The worldly tendency to embellish the facts is found among those who identify with Christ as well. We have heard other fantastical testimonies, did a bit of checking around or put the story on the shelf for a while, then found out the truth was quite a bit different–and usually a lot less interesting, or flattering, or clear-cut as a tale of soaring spiritual triumph.

Do we dare call it what it is? Lying.

I am a professional journalist and have written a nonfiction book. I don’t have a gift for writing fiction, so I am stuck with the truth. One thing I’ve discovered is that life doesn’t unfold in a neat narrative, with a high point in the right place and a tidy dénouement. It takes a lot of work, and considerable skill, to extract a compelling narrative from the disarray of real life.

Note what many supposedly “true” Hollywood films disclose in a single frame of easily forgotten words: “Based on a true story.”

Read: mostly fiction, punctuated with just enough resemblance to real persons that I had to purchase their “life rights” in order to avoid getting sued for stealing their story.

As a follower of Jesus Christ who is also a journalist and nonfiction writer, I see my calling first as a truth-teller. God has endowed me with the Spirit of Truth—the Holy Spirit—and I represent Him by seeking, speaking, and writing the truth.

If my words aren’t true, they are worthless.

If I know my words aren’t true, they are a denial of the Christ within me.

I wish I’d held this conviction all of my life. Check your own words: when you’re 1) caught in a tight spot, and you know you’re at fault in some way; 2) when you’re around people you’re trying to impress; 3) when you’re leaving out certain details of a story that would probably leave your listener with a very different impression; 4) when you hear a gossipy tidbit about someone else that you know you could balance with a more generous truth, but you don’t bother … and see how you fare in the light of the Spirit of Truth.

I have done this many times in the last few years, and that Spirit of Truth will often shine the light on words and gestures of subtle non-truth. But I can confess my faults, and find forgiveness. And I can call on that same Spirit for grace and strength, and He will guide me “into all truth” (John 16:13).

If I had one thing to say to aspiring Christian writers, journalists, and prophets, it is to live and embody truth in every aspect of your life. How, after all, can you be a conduit of the Spirit of Truth if you are not truthful yourself?

I pray that Jesus will be able to say of us what He spoke of Nathanael when He first spotted the future disciple sitting under a tree, “Here is a true Israelite, in whom there is nothing false.”

The Fix Is In

“And now, dear brothers and sisters, one final thing. Fix your thoughts on what is true, and honorable, and right, and pure, and lovely, and admirable. Think about things that are excellent and worthy of praise.”

The operative word here is fix. We’re not just supposed to think of such things but to fix our thoughts on them.

According to my dictionary, to fix is to:

2. To put into a stable or unalterable form.

5. To give a permanent or final form to.

Therefore, we are to direct our thoughts steadily (in an unwavering/free or almost free from change, variation) to what is true, honorable, right, pure, lovely, admirable, excellent, and worthy of praise.

Most of the things we fix our thoughts on fail the Philippians 4:8 test. If someone says something bad about you and you know it’s not true, it automatically fails the test—therefore, you cannot fix your thoughts on it. If anyone tells you depressing news about how you’re a failure or how you’re going to fail, is that lovely? Is it even true?

Test every thought that crosses your mind against that Scripture. And FIX your thoughts on what passes the test, only.

Julie Lyonshttp://www.mannaexpressonline.com
is a journalist, author, and editor. She lives in Dallas with her husband and son.