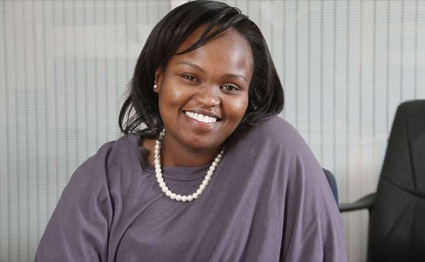 Fueled by the need to be counted among the “cool” kids in school, Wangui Waigwa experimented and became addicted to drugs. Her turning point came in 2012 and the rest is history. Waigwa shares her testimony below.

From as far back as I can remember, I have always felt different. The third born child of four siblings, I was always the biggest child in the class, the biggest child at the playground, the one who never fit into the little desks, the child whose attempt to run turned into a spectacle for others. Trouble started brewing when I hit adolescence. That was when I realised that I was different. I was not one of the “happening girls.”

You know, the ones that boys wanted to speak to or write notes to. I really wanted to fit in and I thought that if I shed the weight then I could be just like the other girls. So I started starving myself, a weight-loss attempt that only made me sick. Then I read on the Internet that alcohol, hard liquor especially, could help me lose weight. Being big-bodied, I could easily walk into the local wines and spirits shops and buy a drink using my pocket money without being asked for proof of age. My first drink was a  shot of vodka. I was 12 years old. So I started drinking and in the process, I made friends with people who were way older than me, people in their early to mid-twenties. Back at school, I began seeing results as I started getting a bit of attention.

Then I started introducing my peers to drinking. They all began looking up to me. I was now one of the most popular girls in school, a heroine of sorts. Even the boys that hardly noticed me before now,  wanted to talk to me. At that point, I believed that I had found my identity. Soon enough, the drinking got old so I started smoking. I would learn from my older friends and then come and teach my peers.

MY FAMILY WAS IN THE DARK

All along, my parents weren’t aware of just how far off the right path I had veered. I got a lot of disciplinary cases at school but they imagined that it was just the passing phase of adolescence.

Right before I started high school I had learnt how to chew tobacco, had started smoking weed and even began sneaking out at night after the rest of the family had gone to bed.

Getting into clubs with my older friends was easy although I was still a big child. The bouncers believed I was as old as I said I was. In high school as my weight and countenance made me fit in really well. I was carefree and I knew a lot of things that the others didn’t. I was an instant star.

The disciplinary issues continued. I went to three different secondary schools and finally sat my final examinations at an informal school.It was after sitting for my entrance to university exam in 2008 that all hell broke loose. I was introduced to heroine followed by a quick upgrade to cocaine. By the time I turned 19, I was an addict – hopelessly strung out on hard drugs.  As I was no longer getting pocket money from my parents, I started improvising. First, I sold all my electronics, my phone, my camera and my laptop. When that money was spent, I began stealing from home. I sold gas cylinders, house fitting and anything that could be sold.

My family got to know and started intervening. I was in and out of counselling; I saw countless psychologists and even got admitted to a rehabilitation centre, but nothing changed because inwardly I was not ready to give up my addiction. .

I continued feeding my drug habit. It escalated to calling my friends and family and lying to keep getting money. At 21, I was imprisoned for a month for handling stolen goods. Prison didn’t change me for the better.

If anything, I learnt new tricks in there.

A NEW CHAPTER For wangui waigwa

When I came out of prison, I got a job and moved out of my family home. With little responsibilities and money to spend, my addiction only got worse. I spent a lot of time in drug dens where I saw things I would ordinarily never have believed existed. I saw people I knew pass out and die right in front of me… but even that didn’t change me.

“Then one day, we woke up to find that the company offices had been raided and our boss had been arrested and charged with fraud and money laundering. I was now all alone. I borrowed money from the friends I had made at my new job but this didn’t last long. I started selling my furniture and electronics just like I had before.

“Then, one morning in June 2012, I woke up in an introspective mood. I had an epiphany. I realised that six of the friends I had been in rehab with had all died because they couldn’t stop doing drugs. I knew that unless I did something, I was headed that way too. I needed to change and I knew that only I could do something about my life.

“That morning, I packed my clothes and went back home to my family who at this point were almost strangers. While they were happy to have me back, I could see in their eyes, the reluctance to raise their hopes. I had already broken many promises. I couldn’t blame them. It was a very lonely time – I felt like the world had abandoned me.

“I quit all drugs cold turkey. For a month, I didn’t leave the house to even go to the shop lest I get tempted to buy a cigarette. Then one day, about a month in, I read a story on the Internet about a Chinese man who planted a stem bamboo and promised his family that their fortunes were just about to change. So they waited for months and then years and nothing happened. Eventually, the man’s wife got tired of waiting and she left him. People laughed at him but he kept watering the bamboo plant. Finally, after six years, the bamboo plant shot up 80 feet in just six weeks. Though his promise to his family tarried, it eventually came to pass.

CLUTCHING ON TO HOPE

This story reminded me of myself and how a lot of people had given up on me. It also gave me a glimpse of my future. I realised that I too could pull through. So I kept going. The more I did, the more things started changing. My physical, mental and emotional weight started falling off. I started making positive friends, then I started going to Mavuno church in Nairobi where I went through a church program and met friends who held my hand. I accepted myself and my life started blossoming.

“The best part is I became friends with my family. I would just sit chatting for hours on end with my mom and my sister – something I hadn’t done in ages. In 2014, I went back to school to study counselling psychology. In 2015, inspired by the story of the Chinese man, I started my own business of supplying bamboo floors and called it Bamboo Flooring. Now, I have a 10-month-old son and I am engaged to the most loving man. Also, from a staggering 160 kilogrammes, I now weigh 90 kilogrammes just 10 months post-delivery.

“Looking back, I think that if someone just sat me down along the way and asked me what was going on, a lot of what happened couldn’t have. Led by this realization, I am in the process of setting up a foundation called Mlango Wazi (Swahili for open door) where people going through experiences like mine can just walk in and talk without being lectured or judged.  For every addict, the road to recovery is a very personal journey. I think that I have covered quite a distance on mine.