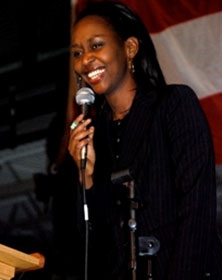 [dropcap]D[/dropcap]uring a one day visit to Dallas, Texas, Immaculee Illibagiza, an Ambassador of peace, spoke of her transformation after a horrible walk in the valley of the Rwandan genocide in 1994, where in 100 days 800,000 people were slaughtered. It has been called one of the worst genocides in the world – Rwanda’s minority tribe was almost wiped out.

Those who managed to survive did so by the special grace of God. Among the lucky survivors was Immaculee Illibagiza, whose remarkable story and heart of peace, brings encouragement and inspiration to men, women and children all over the world. Armed with remarkable grace, Immaculee accomplished her mission of preaching about the power of forgiveness through her outstanding testimony and words of encouragement to all age groups present at the event.

Her gory story behind the glorious story she shares today started when she was a twenty two year college student majoring in electrical engineering and living a normal life. During Easter break from school in 1994, while visiting her parents, her life took a turn that she would never have imagined even in her wildest dreams. She best describes it in vivid detail: “I remember looking up to the hill across the river. And I saw somebody actually with a machete cutting somebody. And we were all like, ˜Wow! Something’s happening here. They’re going to kill us,” she remembers. “People were screaming all over the country. The genocide had begun. It was extremely low tech – no gas chambers here – just machetes, spears and knives, wielded by Hutus, the majority tribe as they tried to wipe out the minority Tutsis who were slaughtered in their tracks, wherever they were found. The killing fields were everywhere. And when it was over, three out of every four Tutsis in Rwanda had been killed.”

When it began, Immaculee’s father told her to run to a minister’s house three miles away, and to beg him to hide her. The minister was a Hutu, a member of the majority tribe that was killing the Tutsis. But he had been a friend of the family and he was a minister. She went to him – she was shaking as she told him her father asked her to come there because things were getting really bad in their village.  Without questioning, he took her and put her and six other women in a tiny, rarely used bathroom in a remote corner of the house measuring three feet by four feet, for 91 days. They were hidden not only from intruders, but from the minister’s large family.

When he took us into the bathroom, I was like, “Oh my God. I will be saved here.” This bathroom was hidden very well and it gave Immaculee and the girls some form of hope. They took turns standing and stretching. Sometimes, at night, when they couldn’t take it anymore and retreated into a larger room adjacent to the bathroom. But it was more dangerous there: killers lurked just outside the window, so the women couldn’t stand up or talk. “I found a place in the bathroom to call my own – That place was a small corner of my heart where I retreated as soon as I awoke, and stayed there until I slept. It was my secret garden, where I spoke with God, meditated on his words, and nurtured my spiritual self.

They were searching. They were there all the time. It was constantly intense, intense, and intense” she said.  Several people had seen the Tutsi women arrive at the pastor’s house, but no one had seen them leave, so after a few days, dozens of Hutus stormed the house, hoping to find the women and kill them.

“There’s a little window in the bathroom. I went up and I looked through the curtains. And I saw like people running, running, running  outside the house. And we heard them. I could see their spears and hear them come inside the house. I never had been so scared in my life. I remember it was like, life swept out of your body in a second. I became dry instantly. I couldn’t even find saliva to swallow” Immaculee explains.

Pastor Simeon Nzabahimana who kept the girls, tried to divert the killers away from the women. He showed the angry mob other bedrooms and urged them to search his attic. Immaculee could hear him telling them “I sent them away. Those girls, I sent them away. They can help themselves. I don’t want to be in trouble.” The truth is if the killers had seen the girls in the pastor’s house, they would have forced him to kill them and they would have killed him afterwards.

During the first search, one killer actually put his hand on the door leading to the bathroom, but he never opened it. After that the pastor moved a bureau in front of the door to hide it from future searchers. Everything outside the bathroom where Immaculee and the others were huddled, including the entire country, had become a killing field. Hutus armed with machetes searched every house, every hill and killed every Tutsi they could find.

What prompted the genocide?

There are things you can point to. The Hutus had long-standing resentments against the Tutsis, who formed the nation’s elite. They had the better houses, better jobs. Radio broadcasts called day and night for the Hutus to go out and kill Tutsis and the Hutus were told by their own leaders that if they didn’t join the killers, they would join the dead. For days, then weeks, then months, the seven women stayed squeezed into the tiny bathroom, surrounded by evil. Asked what was going through her mind, as she sat in the bathroom hour after hour, Immaculee says, she was terrified as she kept thinking of how they were going to catch them and wondered where they will start cutting them and if they will them.  What kept her going were her prayers. Her faith in God deepened as a result of this experience. They all expected to be killed, eventually. One of the girls wished she will be shot and not tortured if the rebels ever found them; another made the pastor promise to put dirt on her corpse so dogs wouldn’t eat her.

During this ordeal, food was not a priority since they were fighting to be alive. Immaculee remembers “Sometimes we used to eat beans infested with little insects. The first time we were served a bowl, I said to myself “Jesus, how am I going to eat this?”” She had no appetite initially but after a while, she managed to eat, by closing her eyes. In all, she lost 40 pounds, one third of herself disappeared during her three months in the bathroom. Looking at herself was like a personal anatomy lesson. To keep their presence secret from others in the house, they couldn’t flush the toilet unless someone else in the house flushed the toilet on the other side of their wall. And they couldn’t bathe. “We didn’t have any change of clothes or any toothbrush to brush our teeth. Nothing! We couldn’t”, she explains.

When the horde of Hutus stormed the house, Immaculee actually heard one of the killers shout her name and boast out loud, ˜I have killed 399 cockroaches, I want Immaculee to be the 400th.” She heard all he was saying and was mentally tormented that he suspected she was in the vicinity. “It was like dying alive” she recalls. During this bitter tribal genocide, the Hutus called the Tutsis “Cockroaches.” The pastor left his bedroom radio on so the women could hear the news. After three months of genocide one day they heard on the radio that the French troops had finally arrived in Rwanda to protect surviving Tutsis, and that one French camp was just a few miles away. Immaculee persuaded the pastor to sneak them there in the middle of the night.

They snuck out at two in the morning, on a day, Immaculee calls “liberation day.”  Since they stood up most of the time in the bathroom she recalls the difficulty of walking normally on that day. She remembers massaging her knees, and struggling to stand properly talk less of walking. Despite all that was going on with their bodies, the fear of death helped them to walk, and even run with all their might to the French compound. On reaching the gate of the French embassy they cried out with all their might “We are Tutsi’, please help us” she remembers. The door opened and they were let in. It was the first time in three months that someone other than the kind pastor had symphatized with them.

Although Immaculee had finally fled to safety, she was soon thrown into great sorrow on learning that her two brothers, her mother and father had all been killed. Her father was shot trying to get food for his neighbor’s children and the killer put his body at a roadblock.

After a hundred days, a Tutsi army formed in exile captured most of the country and stopped the genocide. Today, Tutsis are still in control and are sharing power with Hutus. The economy is coming back, hundreds of thousands of Tutsis have come back from exile, and the country hopes to attract tourists. The country may be peaceful, but it’s still on edge. Some Hutus want to resume the genocide, and some Tutsis still want revenge. Immaculee knows Rwandans can never forget but believes they must forgive. Revenge, she says, only prolongs the pain. ” I don’t want it. After killing my parents, I don’t want them to give me more luggage in my heart, in my belly, you know, to hold this anger” she says.

Immaculee has forgiven Alex, the man who killed two of her relatives and who would have killed her. Asked if she felt angry when she saw him one on one on during her first visit back to Rwanda, “No, no, I was not angry because I was aware it won’t change anything. It won’t change his heart. It won’t bring back people he killed. That’s the worst thing.”

Immaculee’s  story was published in a bestselling book called Left to Tell which has sold more than 250,000 copies worldwide, and been translated into fifteen languages. Left to Tell has been adopted into the curriculum of dozens of high schools and universities, including Villanova University, which selected it for the 2007-2008 One Book Program thereby making it a mandatory reading for 6,000 students. It has also been featured on 60 Minutes, BET, and CNN and in the New York Times. USA Today, Newsday, and many other domestic and international outlets.

In 2006, Immaculee was named one of Beliefnet.com’s Most inspiring People of the Year,and is a recipient of the American Legacy’s Women of Strength and Courage Award. Four years after the genocide, Immaculee immigrated to the United States and began working for the United Nations and establishing the Left To Tell Charitable Fund to help orphaned children in Africa. Her speaking engagements and book sales benefit this charitable fund.