Lisa Kilmer’s triumph in the face of series of adversities 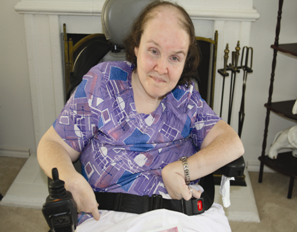 [dropcap]O[/dropcap]n August 3rd, 1966, Lisa Duke-Kilmer was born to James and Oleta Duke in Clifton, Texas. The youngest of three children, Lisa was a beautiful baby whose left hand was deformed as a result of polio. Her parents showered her with love to the best of their ability- her mother walked her to and from school every day. Her brother loved her very much and protected her when he was around. According to Lisa, he was always emotionally and physically available for her like her parents were. Her sister was never close to her and they have remained distanced for many years.

In elementary school, Lisa kept to herself because children always made fun of her. She became a loner as a result of all the taunts she received from classmates and other children.

According to Lisa, kids constantly taunted her: “Lisa Duke, you smell of puke.” It was at this early age she began pouring her feelings to God. With time, she learnt to turn the other ear whenever she was passing through the valley of taunts. She also developed the boldness to stand up for her right when the occasion called for it. In high school, Lisa had a best friend called Laura who was like a sister to her. They sat in class together; ate their meals together; most especially confided in each other. According to Lisa “Laura was one of the best things that ever happened to me. I wish I can see her again.”

When Lisa turned seventeen, she met James who was thirty four years old at the time. To her it was love at first sight especially since he told her the kind of things every girl her age loved to hear. They dated for six months and got married. The following year she delivered a healthy baby boy whom she named Delvis. Two weeks after the birth of their son, she was in the bathroom when something very tragic occurred. Lisa suffered a devastating blow from the monster called stroke. She was only eighteen years old and became paralyzed in her right side. After her stay in the hospital, she was placed in a nursing home in another city. That was the beginning of the end of Lisa’s abode in her familiar environment.

Barely two weeks in the nursing home, her husband served her with divorce papers. He said he needed a woman to look after him and not him looking after a sick woman. He walked out on her and their son’s life to where he felt the grass was greener and has stayed gone till this day. As if that was not enough for Lisa, her sister placed her son for adoption without informing her. By the time she found out, there was no way she could track him down. Lisa was trapped in a world that seemed unfair; she felt that no one loved her. In all this, she says she never cursed or got angry with God because she was grateful she still had the most important component of survival: life. Although the nurses around her told her she sunk into depression, she gladly says I never knew I was depressed because I held on to God tighter than before.

In the nursing home she lived in, some nursing aides were very mean to her. One of them once threatened to let her fall. Lisa boldly replied her “if you dare touch me, I will sue you and make sure you also pay my hospital bill.” In 1990, she had a dizzy spell while seating in her wheel chair. As the aide was trying to get her out of her chair to the bed, he was distracted by what was on the television and did not realize her paralyzed leg was bent backwards. Hence her right leg buckled backwards and was severely broken. She was rushed to the hospital and while waiting to be attended to she asked God “Why did this happen to me.” She happily declares she still did not hate God because “if it wasn’t for him, I will not be on earth.”  Lisa spent a total of fifteen years in this nursing home. One day her sister in law knocked on her door in the nursing home and said “Surprise!” Lisa looked up and noticed a little boy standing there. It was when he said â€œhello momâ€ that she almost jumped out of her skin. Her brother who visited Lisa regularly had been searching for him for many years. He knew it would boost Lisa’s spirit and by the special grace of God, it came to pass. Although Delvis’ adopted parents continued raising him, he saw his mother whenever possible. Currently, he is serving in Iraq and calls his mother and visits when he can. 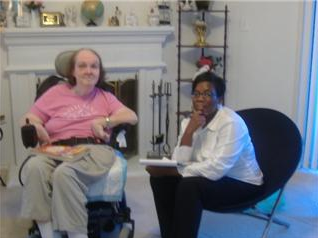 When her mother was diagnosed with heart failure and severe diabetes, her brother moved her to a nursing home in the same city where her parents lived. While in this facility, she got to go home on weekends, and was happy to spend a lot of time with her dying mother. Six months later, her mother went home to be with the Lord. Lisa says she was relieved because she saw the pain her mother was in while alive and secondly, she was sure she was in heaven. Exactly two months, and three days after the passing of her mother, Lisa received an unforgettable phone call in the nursing home. It was her sister in law calling to inform her that her loving and only brother was dead. He had bone cancer all along but never disclosed it to Lisa. He had moved Lisa nearer home to be with him and their mum before they both made their exits out of the world. His death was a very rude shock to Lisa. She became lost and asked God “What is next?” Her father could not come to see her in the nursing home because he no longer had a car and was also paralyzed at the point in time.

The feeling of rejection blanketed her day in and day out until the day she met a fellow resident called Charles, while seated in the lobby of the nursing home. They became friends and a year later got married. Lisa felt content and hopeful that this was what will add the long needed sunshine in her world of rejection. The same year they moved to a nursing home in Richland Hills and not too long after they left the nursing home for good and started staying in a private home care facility in Arlington. One day, her husband Charles announced he no longer wanted to be married. He left her and went to another nursing home. By this time, Lisa had gone through so much to be devastated by his action. Although she still has her wedding band on, she says “if he comes back, its fine and if he does not come back, it’s still fine.”

Lisa takes everyday as it comes. She spends most of her time figuring crosswords. She is extremely alert and loves country music. Asked if there is anything she would like to change about her life she gives the sweetest smile as she says “not being able to walk.” She strongly believes and has the faith that she will walk again. Her favorite scripture is John 3:16. To those that are feeling hopeless, Lisa will like you to know “If I can do it, you can do it.”

Facebook
Twitter
Pinterest
WhatsApp
Previous articleThe Power of Forgiveness In The Wake Of One Of The Worst Genocides
Next articleDr. Freda Lindsay, Founder of Christ for the Nations Institute, Dallas, TX