Archaeologists recently unearthed the original burial place of Saint Nicholas underneath the remains of an ancient church in Demre, a town in Turkey’s Antalya province. It was covered by rising sea levels in the Mediterranean many centuries ago. Saint Nicholas is the figure that inspired stories of Santa Claus because of his kindness, piety, and remarkable works of charity.  It is said that he anonymously gave away all of his inherited wealth and traveled throughout the countryside helping sick and poor people. 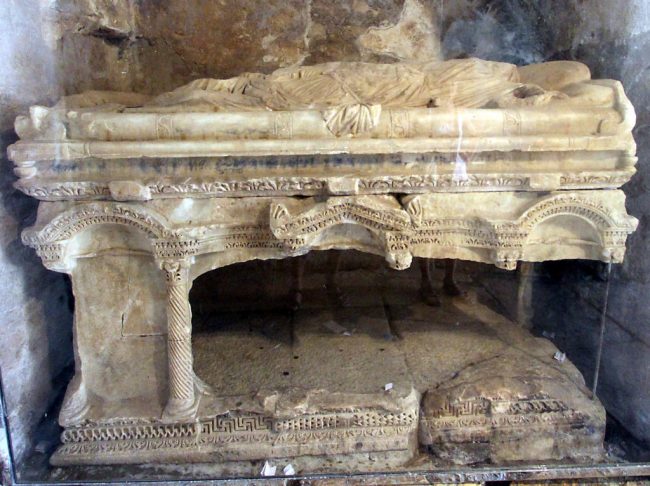 Saint Nicholas was born in 300 BC in a port city called Patara. He was born to wealthy wheat merchant parents that died in an epidemic and left their son a large fortune.  St. Nicholas left Patara for Myra in the Demre district of southern Turkey, where he lived for many years and served as a bishop. He is believed to have died at the age of 65 on Dec. 6 and the church was his last dwelling.  It is reported that the church where he served as a bishop before it flooded in the Middle Ages was built in the 7th or 8th century on top of another church.

Although researchers already knew St. Nicholas’ remains was stolen around 700 years after he died and his body was buried in the fourth-century A.D. church in Turkey’s Antalya province, the puzzle has been the specific spot where he was originally laid to rest.

With regard to this recent discovery, Professor Dr. Osman Eravşar, president of the Antalya Cultural Heritage Preservation Regional Board, told the Demirören News Agency:

“When the screed floor slab laid in the 1970s was removed where it was, an excavation was carried out to find out what’s under it. The result was an early 4th-century floor covering of the church. The current church is later dated. There are some architectural traces in various parts of the early period structure, but there were no traces in terms of flooring. This is an emerging, perhaps earlier, flooring. Our friends who made the excavation are preparing the publication of this. In fact, this is the floor of the period he lived in, and we are talking about the floor on which St. Nicholas’ feet stepped. This is an extremely important discovery, the first find from that period. Therefore, we see this church as a discovery that will increase its architectural history and its iconographic value a bit more. It will be covered with a certain technique and made ready for display.”

The Byzantine church built over the ancient foundation was a place of worship for Orthodox Christians between the 5th and 12th centuries and was added to the list of UNESCO World Heritage sites in 1982.

The site will now “be covered” and “made ready for display,” Eravşar told DHA.

Sidney Cole writes about news happenings around the world.

Facebook
Twitter
Pinterest
WhatsApp
Previous article
New Orleans Pastor Admits Stealing $900K From His Church, Members And School
Next article
Use Probiotics To Raise Your Immunity And Get A Better Mood