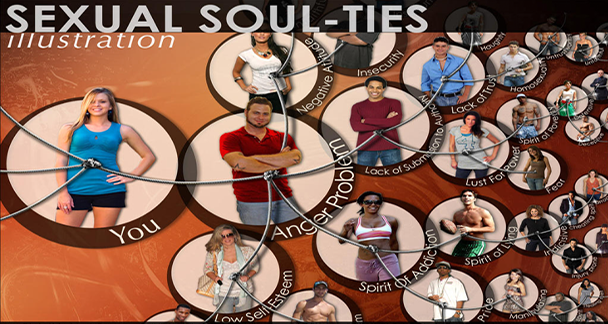 We cannot fully understand Sex God’s Way without understanding Soul Ties and the important role they play in the sex act. This article will help explain what Soul Ties are and how they develop.

Godly Soul Ties In Biblical Sexuality Volume 3, a Soul Tie is defined as a strong, emotional or psychological attachment which joins a person’s soul to another person or thing. The term Soul Tie literally refers to a binding or “tying” of the soul to something. It is the soul being attached to another entity. The soul houses our mind, will, and emotions. Therefore, when Soul Ties are formed, our mind, will, and emotions are all affected. In other words, Soul Ties affect our thinking (mind), our choosing (will), and our feelings (emotions).

When a Soul Tie forms, an emotional attachment develops causing you to think about and desire the thing your soul is tied to. Soul Ties form when we engage our bodies in certain activities. There are two kinds of Soul Ties:

• Ungodly Soul Ties (UGSTs) This blog will focus on GSTs, the kind of Soul Ties which form when husband and wife engage in sexual intercourse. Consider Gen.2:24.

The Law of Cleaving

Gen.2:24 Therefore shall a man leave his father and his mother, and shall cleave unto his wife: and they shall be one flesh.

Genesis 2:24 introduces what I call the Law of Cleaving (LOC). The Law of Cleaving is one of the spiritual laws governing human sexuality. This law promotes the development of Soul Ties within marriage. The LOC is activated every time a husband and wife are sexually intimate. Gen.2:24 makes a clear connection between cleaving and becoming one flesh. The Hebrew word for cleave means; to cling to, to be stuck to, to be glued to, or to join together. The phrase one flesh refers to the physical, sexual union of husband and wife.

How Soul Ties Are Formed– Chemicals at Work

Every time a husband and wife are sexually intimate, the LOC is set in motion and Godly Soul Ties are formed. Scientist have shown that the sex act releases certain chemical substances into the bloodstream. These chemicals interact with certain areas in the brain and lead to the development of emotional attachments to one’s sexual partner. These emotional attachments are called Soul Ties.

The release of these chemical substances, during sexual intercourse, help explain the biological basis for the Law of Cleaving. The chemical substances playing a major role in human bonding include: dopamine, oxytocin, and vasopressin. Dopamine, which is released in the brain during sex, causes sexual intercourse to feel pleasurable. Dopamine also activates the release of vasopressin in the male and oxytocin in the female. Researchers believe both vasopressin and oxytocin influence sexual partners to bond emotionally and psychologically (soul ties).

Even when a husband and wife are physically separated, they can continuously think about and desire each other.

Facebook
Twitter
Pinterest
WhatsApp
Previous article
How Will I Ever Get Over the Pain of Losing my Baby?
Next article
How to cast out Demons – Part 1