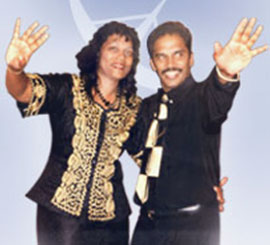 [dropcap]W[/dropcap]hen Rev. Vernon Fernandes was very ill two months after his birth, his praying grandmother offered him to God. Little did she know what she was staging her family, native country of Tanzania and the world as a whole for. Today, Rev. Vernon Fernandes is the Senior Pastor of Agape World Ministries and founder of the most effective TV station in East Africa. Known as Agape Television Network, it is an inspirational Television Station that offers family programs ranging from children shows to youth talk shows and preaching via TBN. It is located on the spectacular Mbezi Beach in Tanzania and reaches out to 6 million viewers.

Rev. Vernon Fernandes, was born and raised in Tanga, Tanzania. He gave his life to Christ on the 8th of July, 1979 and was subsequently visited by the Holy Spirit two days later when he was involved in a Motor bike accident while traveling from Arusha to Tanga. He recounts this divine encounter as a similar experience that Apostle Paul experienced while on his way to Damascus. While riding his motorbike a dazzling light shone and threw him down. It was then that Lord spoke, “I am the Lord you seek.”

After his encounter with the Lord, he decided to start seeking and eating the word of God. He also started visiting churches. 2 years later, God called him audibly to take His good news to the world and promised him that he would get into many homes and save lives. At that time, he had no idea what the Lord was talking about but knew that it will come to pass. By 1977, he started holding crusades without financial support in surrounding villages. In 1987, God told him to set up a Christian TV station.

At that time it seemed impossible because his country was under Communism and there were no TV stations. Because of the fire for God in him, he decided to dedicate 10 years of holiness to the Lord where he served the Lord faithfully and shut his flesh down. He knew when it was time; the Lord will bring him his wife.

Under the leadership of his Pastor Jotham Mwakimage, he served as an usher and was later promoted to be a deacon and finally an Elder. In August 1982, following the call of God on his life, he attended the first Morris Cerullo School of Ministry in Nairobi, Kenya. It was there in the midst of a Military Coup that the Lord again vividly spoke to him and called him into Ministry. However, Rev. Vernon Fernandes just like Moses in the Bible stammered and deeply questioned his ability to preach. The Lord, reassuringly spoke back to him and commanded him to take his word into Nations beginning from Tanzania and to the ends of the world demonstrating the power of the Holy-spirit. Later on after peace was restored in Kenya, Rev. Vernon Fernandes returned to Tanzania and turned his town up-side down while preaching and demonstrating the power of God through signs, wonders and miracle. He later resigned his career as an Audit Manager in January, 1984, so as to coordinate Dr. Morris Cerullo’s work in Tanzania. He led the first delegation of 630 people to Nairobi and there was named the Moses of Tanzania. 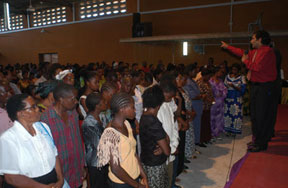 Rev. Fernandes continued to serve the Lord faithfully and prayed for a life partner who would have the same vision and burden for souls not knowing that God would prepare his partner to come from another country. God answered his prayer the day Anny came into his life. Co-founder and First lady of Agape World Ministries, Mrs. Rukumany Fernandes, (Anny Fernandes), was born and bred in a Hindu family in Malaysia. Her father constantly told her that she was born a Hindu and that she would die a Hindu. Anny was acutely tormented with the “fear” of darkness and oppressing spirits that tried to strangle her. Longing for relief from the countless sleepless nights and tormenting manifestations, she approached several witch doctors, mediums and fortune tellers in her town for help however more and more demons came to torment her. Unpretentiously, she sought help from “goddess of Kali” one of the demon gods of Hinduism and had a near death experience as the demon oppression augmented.

Soon afterwards Annie met an ex-Buddhist colleague who had converted to Christianity and was on fire for the Lord… Although Anny was a Hindu, she began confiding in her colleague about her struggles. This work-mate was a Believer that lovingly shared the hope in Jesus but Annie still unconvinced or in a state of spiritual blindness as in (2 Cor4:4) dismissed her faith as a fad. God called Anny in 1987 to serve Him and was granted a scholarship to study in the US. She came back after graduation and faithfully served in her home church “Grace Assemblies of God”. As Director of Evangelism she started door to door ministry for her church and trained others to do what she was doing. She later received an invitation to go to Africa as a missionary. She obeyed the call and became one of the first Indian missionaries to travel all by herself as she came to serve the East African region in 1989.

In December 1990, Vernon and Anny got married and started life together in ministry. They preached the gospel in various towns and villages, cities and nations around the world. However, God began putting a burden upon their hearts to preach the gospel via Television since both of them had witnessed the impact of Audio Visual- Anny as a dramatist on the Government TV of Malaysia and Vernon while projecting Dr Morris Cerullo’s videos in the villages and towns of Tanzania. Hence Agape Television Network was birth.

This station has grown exceptionally since its inception in 2001 from a small studio to a state of the art studio with satellites and modern savvy video cameras and editing equipment that broadcasts 24hrs daily to the society of Tanzania and beyond. It is 100% faith based. No advertising revenue whatsoever. When asked about how they are able to meet their bills on a monthly basis, Rev. Vernon said “we believe in the Living God; Jesus is not in the grave and so there is nothing impossible with him.” The first three years they ended up with five stations and eight years later they have almost nine stations that cover all Africa, the Middle East and some parts of Europe. Their Christian Station has different programs that impact the different facets of the human existence. Although they never planned to start a church, they impacted the lives of many viewers through their TV ministry hence the birth of World Agape Ministries after the Lord gave them approval.

God has been faithful and today, Agape World Ministries has touched many lives and continues to inspire and mould the society. Many People have been healed through Bible teachings and these testimonies have been documented in our quarterly magazine from Ulcers, Cancer, Blood pressure, Asthma, Blindness to Deliverance from evil spirits and generational curses. There are more than 2000 people present every Sunday. According to

Rev. Vernon, the future of ATN seems bright as it aims for greater heights by providing a multi channel digital television and radio network that will reach across Africa, preaching the gospel and bringing to all people, exciting and relevant Christian teachings, worship and revival. In the coming years ATN aims to expand into new regions and impact the world through positive inspirational programs. Today, God has gifted Anny & Vernon are proud parents of two children Bernice and Benjamin.

Sunday morning overflow From August 21st to 23rd, 2009, they held a successful deliverance conference in Dallas, Texas and are available to speak at more conferences and churches in the United States of America. For more information on the Fernandes, visit their website: www.agape.co.tv.