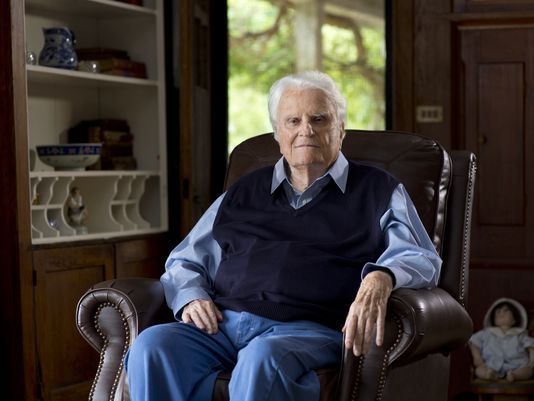 Rev. Billy Graham died at 7:46 a.m. Wednesday, and was found by his longtime assistant, David Bruce, who then called Graham’s son, the Rev. Franklin Graham, who was in Dallas.  There were no family members present.

“It was described by his nurse and doctor as a very peaceful passing,” said Mark DeMoss, a spokesman for the Billy Graham Evangelistic Association. “He was not in any pain, and he wouldn’t have suffered any.”

The BGEA held a press conference Wednesday night at the Billy Graham headquarters in Charlotte to announce details of funeral plans and to talk about Graham’s final moments. At age 99, Graham suffered from several maladies, including vision and hearing loss, as well as Parkinson’s-like symptoms diagnosed nearly 20 years ago.

“I think we can say he passed in his sleep,” DeMoss said. “Nobody would have been with him other than an attendant nurse.”

Graham’s funeral service will take place at noon March 2 at the Billy Graham Library in Charlotte. His body was taken to Morris Funeral Home in Asheville on Wednesday and will be moved to Charlotte via motorcade on Saturday.

DeMoss said the funeral will be held in a large tent, a tribute to Graham’s first Crusade in Los Angeles in 1949. As with Ruth Graham’s burial, Billy Graham will be buried in a simple pine casket made by inmates at the correctional facility in Angola, Louisiana.

The funeral will be private and by invitation only, with some 2,300 invitations going out, including to President Donald Trump, Vice President Mike Pence and the living former U.S. presidents, George H.W. Bush, George W. Bush, Jimmy Carter, Bill Clinton and Barack Obama, DeMoss said. He did not have information on any acceptances Wednesday night.

Franklin Graham will speak at the funeral service, as well as Graham’s four other children.

Graham will lie in repose Monday and Tuesday at the Graham Family Homeplace at the Billy Graham Library. The public can pay its respects both days, from 8 a.m.-10 p.m.

Details on the motorcade will be released Thursday.

The Graham homeplace was built in 1927 by Graham’s father and moved to the library site. Graham lived in the home from age 9 until he left for college.

Graham will be buried on the library grounds next to his wife, Ruth Bell Graham, who died in 2007.

Ever since the passing away of Evangelist Billy Graham yesterday, February 21, 2018, tributes have been pouring in from people of diverse backgrounds from different parts of the world. Evangelist Graham touched so many lives and walked the talk the he preached for several decades. Social media is lit with his name trending and overflowing commentaries. In the midst of all, a tribute by Gospel artist Nathaniel Bassey says it all:

In the last 24 hours or so, News Media, social media and every other forms of Media have been awash with stories, captions and testimonies about this ONE LIFE. Billy Graham. Even secular News Media have spoken in such a honorable manner about this Man of God. As I read and listen closely, I’m yet to see anything that speaks about his material possessions. He hasn’t dominated global headlines because of riches and material wealth. But instead the whole of creation is standing because of the JESUS He preached so unmistakably and unambiguously, and the accompanying Life He lived. I read of Don Moen’s testimony whose Father in law was saved due to Billy’s Radio Broadcast in the 1950s. And because of that one experience changed the whole course of life of that family. One of whom is Don’s Wife. Imagine the number of Pastors saved, the Ministries Born, and the multitudes eternally saved because one man preached and lived JESUS.
I did a search on google this morning and found out the name BILLY GRAHAM was the most trending name in the World in 24 hours. Something many seek after. But something another man achieved even without seeking. But rather by seeking Christ’s kingdom and righteousness. And not just that – in the past 24 hours, there’s been so much mention of the name JESUS on secular news media and on social media because of Evangelist Graham.As I read all of these, it becomes clear what God intends our lives to be. One that dispenses the GLORY OF GOD. Paul puts it this way…. “But thank God! He has made us his captives and continues to lead us along in Christ’s triumphal procession. Now he uses us to spread the knowledge of Christ everywhere, like a sweet perfume.”
‭‭2 Corinthians‬ ‭2:14‬ ‭NLT‬‬.
As the body of Christ world over celebrates the transition of one of her generals, this occasion leaves me with some pertinent questions. What am I preaching? And How am I living? Am I preaching and living Christ? What fragrance is my life exuding? And what fragrance would it leave behind?
It is true what Jesus said, that a man’s life does not consist of the things that He owns.
And I dare to add, “but rather, about the LIVES He touched.” WHAT A LIFE ! BILLY GRAHAM!