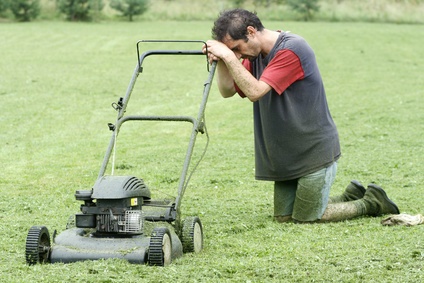 I’ve got good news and bad news.  The bad is that I finally did have to cut the grass; the good is that my 1989 mower started right up, as if anxious to begin its silver anniversary year.  When I was all done, I have to grudgingly admit the lawn looked good.  Though it was a nice feeling, I must also admit it still didn’t fill me with resolve to cut more often.  Instead, I thought maybe I should stall awhile on starting the sprinkler system.

Shortly thereafter, one of my sons borrowed the mower and kept it so long, it was time for another cut.  As the days passed and the grass got higher, it seemed almost patriotic to be living above the fruited plain; however, because I knew the city has a 12-inch height limit, I figured I’d better overcome my natural inclinations and ask him to return it.  Though the grass was nowhere near 12 inches, the last thing I needed was to have some government bluenoses poking around.  They’ve never been shy about ordinance enforcement, and I sure didn’t want to hand them a sword.  But here’s where the news gets really good: I returned from work the next day to find my son had not only returned the mower, but had also done all the cutting, plus weed whacking.  After confirming he had not suffered any recent blows to the head, nor had begun any medication, I swiftly conveyed my gratitude, stopping short of kissing his feet.

Meanwhile, the Mrs. has said nothing more about moving to a house with acreage, and I’ve said nothing more about finding a condo.  Instead, she settled for a more swiftly attainable goal.  I returned from work to find her getting ready to leave with our daughter and grandchildren.  “We’re going to buy chicks,” she announced.  I just gazed at her, wondering if she was the one who taken a blow to the head.

I knew she likes cage-free, healthy eggs, and had previously spoken of raising chickens, but I always figured it was just talk.  I guess 31 years of marriage is not always enough to have your mate figured out. Besides, she couldn’t expect me to take it that seriously.  After all, I was born and raised in Chicago, so chickens in my backyard is never going to compute.  You might as well expect me to hunt wild boar in outer Mongolia.  She, however, had been raised with chickens—a fact she must have carefully concealed during courtship.  So while I see potential annoyance, she’s on a sentimental journey—and I do know enough to keep my mouth shut and play along.

So until her co-conspirators—otherwise known as our children—build or buy her a coop, we now have six chicks occupying a former toy box in our house.  As the odor intensifies, they’ve gone from dining room, to laundry room, to garage.  Our daughter and grand kids take them outside at every opportunity, enjoying their antics, while I remain studiously detached.  It’s amazing how rapidly they’ve grown in so short a time on mere feed and water—even faster than one of my college friends on pop and chips.

In a few weeks, they’ll be big enough to require a coop, so the kids announced they were coming over last weekend to clear a spot for it behind our shed.  This involved collecting and chain sawing a bunch of wood, plus raking a mountain of pine needles.  Naturally, I wound up included in the “festivities,” so you can imagine my delight, especially when someone knocked over a $10 gallon of saw oil in the garage.  It was not I who needed reminding that they manufacture bottle caps for a reason.

Meanwhile, there’s a whole section of city ordinance on everything chicken—and that’s going to be her baby—limitations, exclusions, permissible coop dimensions—you name it.  Everything’s there but a limit on the number of permitted chicken feces.  If they tax those by the pellet, we’re in a lot of trouble.

Our next-door neighbor was quite delighted at our acquisition, as it turned out.  She had also bought chicks, and worried about our reaction, hiding them in her garage, working up the nerve to break the news.  However, seeing ours running around from her back deck, she expressed great relief and delight  we are in league after all.  We then discovered  the neighbor across from her also has chicks.  Strange that three immediate neighbors will all have full-grown chickens, so there goes the neighborhood.  As long as this is the case, maybe I should get into the act and get goats, like others up the street.  That way I’ll never have to cut the grass again.

Chuck Goldberg has a degree in journalism and a Master of Divinity in Christian education. A former newspaper reporter and magazine managing editor, he is now an ordained minister and freelance writer-editor.