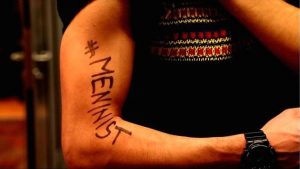 Imagine you are sitting on a plane and then an airline stewardess asks you to move your seat solely because you’re a man. Well, this very thing happened to Johnny McGirr. A fighter-fighter from Australia. He purchased a ticket and his seat happened to be next to two minor boys who were flying to go see family. A stewardess forced the man to move because it was against their policy for a male to sit next to minor children. Talk about discrimination!

This is the reality men face. Whether we are in public parks, working as sporting coaches, teachers, going on a date, or in the workplace, we are under constant scrutiny. All it takes for a woman or child to destroy a man is to say, “He touched me without my permission.” These 6 words can destroy a man’s career and life. “He raped me”, those 3 words can do even worse.

That very thing has happened to many men, especially those who work in the entertainment field. We can find many examples of extortion in the world of professional sports, acting, and Hollywood entertainment. Women will often make a false-rape allegation, then go on television to promote a book they wrote about the rape, thus making millions off the alleged incident. Men have to be very careful in this politically charged time we live in.

These examples aren’t to say that women are not discriminated again. Men can be as promiscuous as they want and no one says a word. However, if a woman sleeps around, she will be called nasty names. It is totally unfair, and perhaps this is why so many women falsely claim rape charges. To save face or to extort. Women should not be shamed for their sexual behavior, however, they should not be allowed to destroy a man’s life in order to “save face”.

Militarily, in all but 7 countries, men are forced to sign up for the military draft or face criminal charges. No where do you see women protesting or fighting for equal treatment in this category nor do you see them fighting against the draft at all.

When it comes to relationships, women also have 100% reproductive rights. It was argued in Roe Vs. Wade, the case that allowed for abortions to take place, that “An unplanned pregnancy can ruin a woman’s educational and financial future”… Yet man have no opt out abilities in the case of an unwanted pregnancy. Men are told to pay child support or marry the woman. If he doesn’t pay, he can face felony charges. Sweden is trying to change this with the “financial abortion law”, yet it is heavily opposed. Conversely, in Israel, there is a law called the “Tender Years Law”, which states that men are not needed in a child’s life for the first 7 years. A guess a man’s life is expendable huh?

Even after the child is born, the mother still has the chance to give up the child under the “Safe Haven Laws”. She can simply drop off the child at any police or fire station, no questions asked. For the woman who doesn’t want a child, she is “pro-choice”, but if a man doesn’t want to be a father, he is “A deadbeat”. Sounds fair huh?

After a divorce proceeding, there is no default joint custody clause either. Men on average, will spend upwards to $30,000 in attorney fees just to get custody rights. Even then, the woman often will not comply or falsely accuse the man of abusing the children. If little Johnny gets a scrape on his knee, you better bet that Child-Protective-Services will be at his door! Men only win full custody 7% of the time. In those cases, the mother is usually a drug addict, dead, homeless, or simply voluntarily agrees to hand over custody.

Men make up 80% of the homeless population and account for most suicides. Men are twice as more likely to file for bankruptcy and live on average 5 years less than women. They make up nearly 90% of all work related deaths because men are usually working the dangerous jobs that women refuse to do.

It’s time we stop vilifying men. Instead of only teaching our children to “respect girls”, “protect girls”, we should teach our children that boys deserve the same treatment. In fact, boys make up the bulk of all illegal child soldiers in the world. Boys and men are also more likely to receive harsher sentencing from judges for the same crime committed by women. The stats are all there. The “patriarchy” is not only harmful and discriminatory against women but also men. If women want “chivalry” to return, they must also return to the ways of submissiveness. If women want to take on masculine roles, they must also take the responsibilities that come with it.

There should be a #METOO movement for men. Destroyed in the family law courts? Constantly judged by society as being a potential predator just because you are male? Expected to never show weakness? Expected to always be strong?

Randell Stroud is a self-defense instructor and experienced paralegal specializing in constitutional law, bankruptcy law, human rights, and international law. He has authored several books including his most famous work, “Global Human Trafficking in the Family Law Courts” available on Amazon.