In a society where looks and social status are of more importance than love and obligation to family, many kids are subjected to the pain and agony of being abandoned by the very parents who are supposed to care for them for the most infuriating reasons.

In 2017, a movie titled Wonder was released as directed by Stephen Chbosky. It featured a young boy, Jacob Tremblay, playing Auggie Pullman, the lead. It is a story that helps us to understand what it feels like to be Jono Lancaster.

Jono has a rare genetic disorder called Treacher Collins Syndrome. Individuals with this disorder miss some facial bones that allow certain parts of their face to sag, usually accompanied by hearing loss. Jono has no cheekbones which causes his eye to dip down and very little ears thus needing hearing aids.

Unlike others severely afflicted by the syndrome, he doesn’t need help eating or breathing, yet, 30 hours after his birth, he was abandoned by his parents.

I believe that a remarkably close bond is formed between a mother and her child even before the child is born. She readily loves him and can’t wait to hold him in her arms. How he looks or doesn’t, is not and never is a reason to abandon him. This wasn’t true of Jono’s biological mom.

He was adopted by Jean Lancaster who perfectly played the role of mom and dad. With the help of social services, she tried to connect with his parents to no avail.

As Jono grew, he realized that he looked different. Kids his mate didn’t want to play with him and he got lots of stares. He was considered ugly and infectious.

Trying to Blend in

As a child, he was desperate to have friends. To accomplish this, he bought lots of sweets and gave them to other kids just so they would like him. It never worked.

Instead of being accepted, he was bullied. Although not physically but emotionally. Rude remarks were made about him, how ugly he looks and how some felt he would pass the “plague” to them.

Rude and demeaning remarks are most effective at harming a person emotionally but it as well affects them mentally. It affects how he views himself and pushes him to develop a negative outlook on life.

Was this true of Jono?

Well, as he grew older, the bullying worsened. He resented his appearance and never wanted to see his reflection in a mirror. He hated his parents for leaving him, his friends for berating him and himself for looking like he did. Simply put, he was mad at the world and most of all, at himself.

He tried to wreck havoc severally just to turn attention away from how he looked, to attract them to something other than his face.

What was the Turning Point?
It was around the time he started working at a friend’s bar. At first, he was difficult because he felt the customers were always staring and laughing and the jeers only got worse when they were drunk.

On a faithful day, a skinhead walked in and was interested enough to ask why he looks the way he does. Jono explains it to the man and the man joked about it making a comparison between Jono and his wife. They both laughed about it. Gradually, Jono started to realize that he was luckier than many with the syndrome and that he had a lot to be thankful for.

He started to think positively and develop a positive attitude toward life. He realized that his previous thoughts were disabling. They never let him move past where he was. But, now, with the right attitude, he has achieved and is achieving many great things.

He is presently traveling around the world, sharing a positive message with those like him. He is doing what he can to create awareness about the Treacher Collins Syndrome. He is inspiring kids around the world and adults alike who have this genetic disorder to be comfortable and content with being different.

Of course, they do not have an ordinary face. What they do have is extraordinary. It is not normal but supernormal.

Did his parents come looking for him?

No, they didn’t. Instead, Jono went in search of them in 2009. He was happy and he wanted them to know that.

He found them but just as at birth, they rejected him.

This time, the pain was unbearable. He cried long and hard.

Eventually, Jono came to realize that you don’t force yourself on others. He had to painfully come to terms with their choice. By the way, where they failed to fulfill their responsibility, Jean made up for in a hundred fold.

I wonder what kept his parents away. Were they concerned about their reputation or they felt they just couldn’t cope?

Whatever their reason, I hope they know that how he looks didn’t just come about. Both of them possess a recessive gene that became dominant in Jono. If blames were to be placed, I hope they know where it lies. 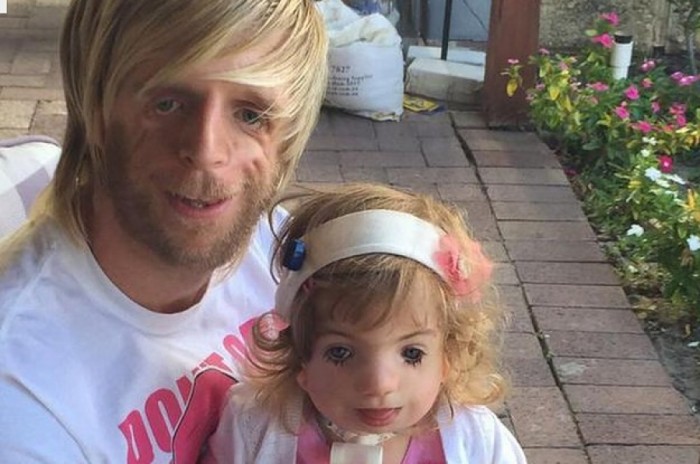 Kids with Treacher Collins Syndrome undergo numerous surgeries to breathe, to see, to hear, and to look a little better. They fight a hard battle. Thus, we all should keep in mind the need to be kind because everyone is fighting a hard battle, some harder than others.

Jono’s external appearance is now incapable of taming the beauty he is on the inside. He has friends who love him for who he is, not for how he looks.

Jono Lancaster is a wonder and so is every child with the Treacher Collins Syndrome.

Trust and Faith – Aren’t They The Same Thing?