Jesus Christ Is Still In Our Midst 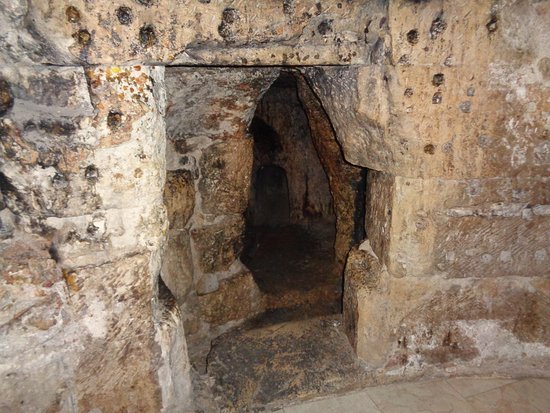 At Easter we celebrate the death, burial and resurrection of our Lord and Savior, Jesus Christ.

Going on two years now, we buried my wonderful wife, Debbie.  For those who don’t know she passed on June 30, 2016 from a battle with cancer.  It was a very difficult thing to do.  Knowing that she was going to be lowered into the ground and covered with earth and that I would never see her again in this life was not easy.  But it was necessary.  Even though I know that the real Deb is not there I still try to visit the cemetery every week and spend a few moments saying “Hi.”  However, I can’t help but feel vain when looking down at the ground because as I said, the real Debbie is in Heaven with the Lord.  Only her earthly remains are in the ground.

The Sepulcher in Jesus’ day was nearly always a cave or hollowing in a rock or hill where the dead were laid.  After dying an excruciating death at the hands of the Roman soldiers and Jewish leaders, Jesus was laid to rest in the sepulcher that had been reserved for Joseph of Arimathea, a secret follower of Jesus and a member of the Jewish Sanhedrin.  He had asked for the body of Jesus when He was ready to be taken down from the cross.  Normally, because it was thieves and murderers that were executed by crucifixion the bodies were placed in unmarked graves barely covered with earth if at all.  Joseph knew this and so asked for His body and placed Jesus in his own reserved Sepulcher.

It had been secured by placing a huge rock over the mouth of the tomb and a Roman guard stationed there because it had been rumored that He would rise again on the third day.  These precautionary procedures were done to keep the disciples of Jesus from stealing His body and claiming He had risen.  But the third day came and He did indeed arise.  Very early that morning an angel from God came and rolled the stone away and a bright light blinded the soldiers and the body of Jesus was gone.

It was that morning later on when all the excitement really took place.  We read about it in John 20:1-8.  First the women had gone to the tomb waiting until then because it was the day after the Sabbath.  They intended to make sure that the body of Jesus was clean and properly prepared for burial.  But when they arrived they saw that His body was gone and an angel told them that He had arisen as He had told them.  They immediately ran back to tell the disciples and then Peter and John ran to the tomb to see for themselves.

Finally, returning, Mary Magdalene came back to the tomb to mourn for her beloved Lord.  She wept as she thought about Jesus and all He had done for her.  It was then that a voice called out to her asking why she was weeping.  She thought him to be the keeper of the garden where the tomb was located and asked him if he had moved the body of Jesus and if so where had he taken Him?  Then He spoke her name, “Mary.”  The way He said it she knew it was the familiar voice of Jesus.  And her mourning turned to rejoicing.  Later that afternoon Jesus appeared to His disciples in the room in which they were staying, perhaps it was still that upper room where they had eaten the Passover with Jesus just three nights before.  We don’t know for sure and the Bible really doesn’t say.  However, He appeared to them where they were.

The point I want to make of these events is that Jesus is still in our midst.  Oh, He is for certain seated at the right hand of the Father making intercession for us.  But by way of the Holy Spirit He is still with us.  In our services sometimes we feel a closeness to Jesus and we may say something like, “He is here in our midst.”  The truth of the matter is that He is always in our midst.  We just don’t take the time to realize His presence.  As we begin to worship Him and place our minds on Him then we realize that He is there with us by way of the Holy Spirit and it may seem like He has just arrived.  But the truth tells us that He has always been there but we have left Him by getting preoccupied with other things.

Know that the risen Savior is still with us.  We can’t see Him but we can know that He is there and is always there if we will just reach out to Him.  He isn’t in a dingy sepulcher and He is not dead.  He is alive and with us each and every day.  Know that He is there.  Know that He will always be there and rejoice this Easter with the truth of the empty tomb and the presence of Christ.

Jerry D. Ousley is the author of “Soul Challenge”, “Soul Journey”, “Ordeal”, ïThe Spirit Bread Daily Devotional and his first novel “The Shoe Tree.” Visit our website at spiritbread.com to download these and more completely free of charge.