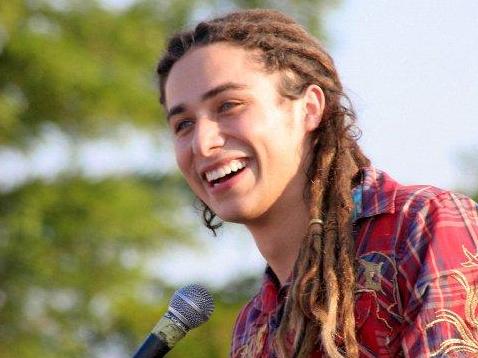 That Kenny Loggins song, covered for American Idol by past winner Ruben Studdard, played as Jason Castro watched the carefully crafted, tear-jerking montage of his Idol journey. Celebrate me home. That’s a tall order for anyone after losing what is  arguably the biggest singing competition in America.

But Jason Castro is not most people. He is thankful for every minute of it. Castro grew up as part of a musical Christian family. He began drumming young but  never saw himself at the front of the stage, as he puts it. In college, he picked up the guitar, took an interest in songwriting, and began performing at coffee houses. When the opportunity to be on Idol came around, he’d only been singing for a year and a  half.

Even without a win, clearly Castro was on the right path. It was evident in his  performances, as judge Paula Abdul noticed: “You’re so real, you’re so genuine, your  artistry always shines through. You blow me away.”

After being voted off, Castro had the insight to realize God had bigger plans for him  than Idol, the biggest “front of the stage” opportunity most artists ever get. “It’s  always a journey, but there is a peace that comes when you know you’ve arrived  where you are supposed to be. You can be doing something good and right, but not  be on the path God has for you.”

Castro always loved music, but didn’t know if there was a future in it. He worried  about what he would do, where he would go, how he would make his way in the  world. “The main message that I try to send is that I think so many people wonder as they grow up, ‘What I am supposed to do?’ And that’s my story. When I stop  worrying so much about that and allow God to work in my life, the rest works itself out. Trust the Lord your God with all your heart, with all your soul, with all your  strength.

“I never imagined I’d be doing what I’m doing. I’ve always loved music but I’ve never  saw myself at the front of the stage. I had to trust God with my music and the  opportunity.” Opportunity is one thing he is not short on after his season on Idol.

This summer, Castro performs at Cantinas Music Festival, an event put on by the  Cantinas Ranch Foundation, a non-profit whose mission is to encourage artists like  Jason Castro who are walking in their calling and bringing light and encouragement  through the radio. “It’s going to be a fun day. It’s exciting to be on the West Coast… the arts and music are for God’s glory and to help us celebrate God’s glory and be a  reflection of what He created.”Over the next year, he is staying wide open to the possibilities before him: “I’ve got a lot of touring, some new music coming out, and I was just in my first movie, A  Perfect Summer.”

Although he has no idea what God has in store for him next, he’s OK with that.  “Dreams do come true, so dream big.”