Jason Brown left the NFL to become a farmer

Jason Brown had seen it all. A great career as one of the best centers in the NFL history, a 5 year 37- million-dollar contract with St. Louis Rams and an opulent lifestyle many dreamed of.  In spite of the evidence of good living that escorted him everywhere he went, there was a yearning on his inside for something beyond material things.

In the middle of his career in 2012, Brown took inventory of his life and decided it was time to fill the void causing a disturbing turmoil on his inside. He got a revelation from God to move back to his home state of North Carolina and start farming. He was going to walk away from professional football for good and do something more meaningful with his life.

When Brown’s agent found out what he was planning to do, he warned him about making the biggest mistake of his life. “I looked right back at him and I said, “No I’m not. No, I’m not” Brown said was his reply to his agent.

Brown quit his glamorous football career to become a regular farmer even though he had no farming experience under his belt. When asked how he started farming, he disclosed he watched a lot of Youtube videos and got assistance from other farmers in the area. His wife and family threw their support behind him as they downsized from a palatial mansion to a regular ranch home.

Recently, Brown harvested his first batch of 100,000 pounds of sweet potatoes from his 1,000 acre farm in Franklin County, North Carolina.  His farm which he called “First Fruits Farm,” donates the first fruits of every harvest to food pantries in the community. 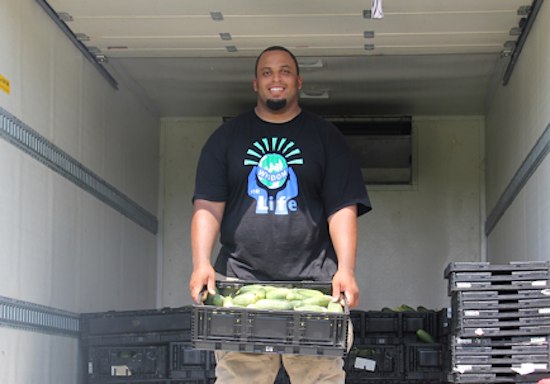 “When you see them pop up out of the ground, man, it’s the most beautiful thing you could ever see,” said Brown. He said he has never felt more successful.

“Not in man’s standards,” said Brown. “But in God’s eyes” he told a CBS news correspondent during a recent interview.