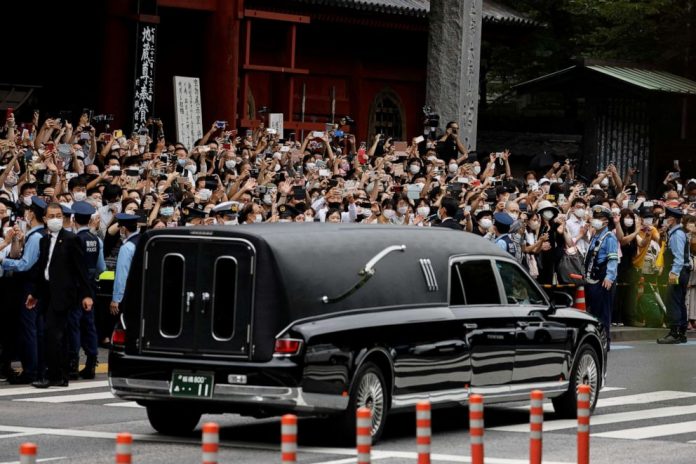 Japan on Tuesday said farewell to its former prime minister and president of the Liberal Democratic Party, Mr. Shinzo Abe. He was a polarising figure who dominated politics as the country’s longest-serving premier, before being gunned down at a campaign rally last week.

Crowds packed pavements lined with a heavy police presence as the hearse carrying Shinzo, who died at age 67, departed from a central Tokyo temple on a procession through the city.

With nearly a dozen helicopters circling overhead, people bowed deeply, their hands clasped in prayer, as the hearse passed in a procession carried live on broadcaster NHK. Others clapped, cheered or waved.

“Thank you very much for your work for our country,” one man repeatedly shouted.

Hundreds had filed into the temple where Abe’s funeral was held on Monday evening and Tuesday morning, prior to the private ceremony, to pay their respects.
His killing on Friday by an unemployed man wielding a homemade gun stunned a nation where both gun crime and political violence are extremely rare.