Is Prosperity Gospel A False Gospel? 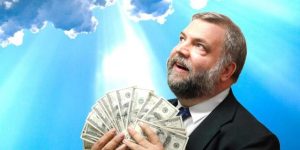 There are more than a few Christians today who claim that successful Christian living should involve financial prosperity. They say that if a believer is closely following Jesus as Lord and is taking hold by faith of what God is offering to them, that person should experience material wealth.

In comparison to what the Bible actually teaches, this is a remarkable claim. Either those who make it have not been reading Scripture very much, or they haven’t been absorbing what they have been reading.

In what follows, I hope to show clearly from the Bible that it is common for devout Christians to experience material poverty through no fault of their own.

In the discussion I will focus on New Testament passages. The New Testament should always be our starting point for any biblical investigation into how Christians should expect to live, because it was written under New Covenant conditions. By contrast, it is often more difficult to know exactly how the Old Testament, written under Old Covenant conditions, applies to Christians under the New Covenant. In any case, there are plenty of New Testament passages that deal with this topic. So we will have no problem reaching a confident conclusion by focusing on the New Testament.

Let’s turn, then, to the Bible.

Luke 6:20-26 is an important passage. Here Luke tells us about some teaching of Jesus:

“20 And looking at His disciples, He said:

(Scripture readings in this article are my own translations of the Greek text.)

This passage is formally said to be addressed to Jesus’ disciples (v. 20). However, Luke 6:17-19 seems to envisage a wider group listening to what He says. And immediately after He finishes His instruction in 6:20-49, Luke 7:1 says:

“When He had finished saying all this to the people who were listening . . .”

Regarding the first group in the first set, then, Jesus teaches:

And this corresponds to the first group in the second set:

“24 But woe to you who are rich, because you have received your comfort already.”

In these texts Jesus must be referring to material poverty and wealth. “Rich” in v. 24 cannot mean anything other than rich materially and financially. So because these texts correspond to each other in theme, “poor” in v. 20 must be about material poverty.

Of course, this mustn’t be taken literally to mean that every poor person is pleasing to God and every rich person is displeasing to Him. In the Semitic culture of Jesus’ day it was common to make a statement that allowed for many unexpressed exceptions to it. And we should certainly understand there to be many exceptions to what Jesus says in this passage. Nevertheless, His words here make it clear that we should commonly expect to find devout Christian people experiencing material poverty.

In Luke 9:57-58 we read about an interaction between Jesus and a would-be follower:

“57 As they were going along the road, someone said to Him: ‘I will follow You wherever You go.’

58 And Jesus said to him: ‘Foxes have holes and birds of the air have nests, but the Son of Man has nowhere to lay His head.’”

In His reply Jesus is clearly implying that if the man really does follow Him wherever He goes, this may well involve material poverty.

It is true that this episode refers to the time of Jesus’ earthly ministry. Nevertheless, there is no good reason for thinking that what He teaches here doesn’t apply to the whole Christian era too. If that were not the case, it is difficult to think of a reason why God decided to make these words part of the Bible.

This is another passage, then, which points against the idea that it is always God’s will for a Christian to be financially well off.

In 2 Corinthians 6:10 the apostle Paul refers to himself in this way:

Here Paul uses a play on words to contrast his material poverty with the spiritual wealth that he is able to channel to those he evangelizes.

It is true that as an apostle Paul is not a run-of-the-mill example of what to expect in every area of the Christian life. Nevertheless, devout followers of Jesus can expect much of what Paul experienced. And there is no good reason for thinking that this doesn’t, at least for many Christians, include his experience of poverty.

“1 Now, brothers, we want you to know about the grace of God that has been given to the churches of Macedonia, 2 that in a great ordeal of suffering . . . their deep poverty overflowed in the wealth of their generosity.”

In this passage Paul strongly commends the Macedonian churches for their financial generosity despite the fact that they were very poor. There is not the slightest hint in the context that their poverty is down to any failing on their part.

“I know how to get by with humble means, and I also know how to have plenty. In each and every circumstance I have learned the secret of being filled and going hungry, of having a surplus and being in need.”

Paul clearly refers here to times of material poverty that he has experienced. And, again, it makes sense to think that non-apostles can often expect the same.

Furthermore, the “high position” James refers to can only be a high spiritual position. He is saying that Christians who are materially poor should rejoice in the benefits they have in Christ.

It is not possible to reconcile these words with the idea that devout Christians should usually expect to be financially prosperous.

In James 2:5 James asks his readers:

“Listen, my beloved brothers, did God not choose those who are poor in the eyes of the world to be rich in faith and heirs of the kingdom . . . ?”

It would be taking these words too literally to understand them to mean that only financially poor people can be heirs of the kingdom. Nevertheless, this verse teaches that we should expect material poverty and richness in faith often to go together.

Importantly too, there is no suggestion in the verse that the people in view are poor only to begin with but become financially prosperous once they have become Christians. The material poverty and spiritual wealth occur simultaneously. These believers may be looked down on as poor, but in fact they are wealthy in what is important.

In the letter to the church at Smyrna in Revelation 2:9 the risen Jesus tells the Christians there:

This means that Jesus knows about and sympathizes with their material poverty but reminds them that spiritually they are rich.

There is no indication that these Christians are in any way at fault for their poverty. Importantly too, in the entire letter to the church in Smyrna (Revelation 2:8-11) the Lord gives no explicit or even implied criticism of it, which strongly implies that the church was very pleasing to Him.

Once again, then, we see that devout Christians should not always expect to have material wealth.

The combined weight of the above passages should make it clear that Christians doing the will of God can often be materially poor.

Those who say that it is God’s will for every Christian to experience financial prosperity are therefore quite simply contradicting the Bible.

Teaching that Christians should expect material wealth is not just a mistake. It also has serious negative consequences of various kinds:

(1) The prosperity gospel can encourage Christians to spend too much effort seeking material blessings. It tends to foster selfishness.

(2) This teaching can lead believers to focus too much on life now instead of fixing our eyes on what is to come after death (2 Corinthians 4:18).

(3) Christians who accept the prosperity gospel often become discouraged and weakened in their Christian faith if they experience poverty.

(4) Christians who believe in the prosperity gospel often judge and look down on brothers and sisters in poverty.

(5) The prosperity gospel can be a disincentive for wealthy Christians to help poor believers in need. A rich Christian will sometimes withhold help from a poor Christian who badly needs it, because they think the poverty must be the poor Christian’s fault, and they don’t want to encourage failure.

It is true that there are times when it is right to withhold help from fellow Christians, including financial help. But this should be the exception rather than the rule. Usually, withholding help is the wrong thing to do.

We shouldn’t go to the other extreme

Although we must firmly oppose the prosperity gospel, it is certainly possible to go too far the other way. There are a few Christians who think that if a believer is notpoor then something must have gone wrong!

This is certainly a mistake. Scripture doesn’t teach that every Christian should experience poverty or that Christians can never be financially wealthy in the will of God. And most of us who have been believers for any length of time and have been open to receiving from Him by faith will have some experience of receiving material things from His hand, even luxury things at times.

We shouldn’t think, then, that successful Christian living must involve poverty.

Nor should we discourage Christians who find themselves in poverty from looking to God to lift them out of it. It will surely often be His will to do this.

See also my longer article on this topic:

Is It Always God’s Will for Christians to Avoid Poverty?

I have been a Christian for over 30 years. I have a Ph.D. in New Testament from the University of Edinburgh. I am a UK national and I currently live in the south of Scotland. Check out my blog, The Orthotometist, at maxaplin.blogspot.com