How to Handle Toxic Friendships 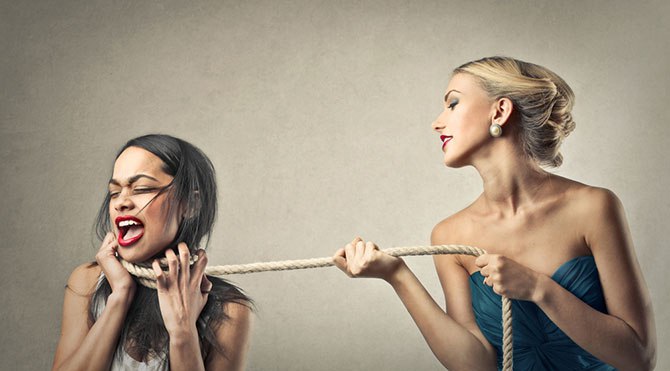 The problem with toxic friendships is that other people tend to dismiss it, but friends who are more like enemies, or “Frenemies” can be very abusive. Frenemy relationships tend to be more emotional (controlling, passive-aggressive or demeaning) than physical. It’s usually not as intense as domestic abuse, because friends have an easier time, in most cases, walking away from abuse than romantic or family relationships. Because people tend to downplay the abuse of a friend; victims of it keep it a secret.

How to tell if a friend is a “frenemy” (alternating pronouns)

1. She gossips behind your back. If she says bad things about you to your friends, or tells others secrets you shared in confidence, she’s trying to build herself up by undermining you.

2. He’s unreliable. If he doesn’t keep his promises, or is always late, or likely not to show at all, he doesn’t care enough about you. He’s either too out of control or too wrapped up in himself to be a good friend.

3. She’s jealous or upset when something good happens to you. This is not the attitude of a friend, this is a competitor.

4. You only hear from him if he wants something from you. If he only contacts you when he wants a ride, or for you to take him to lunch, or help him with homework or a project, or be his “wing man” when he wants to troll at a bar; then he’s just using you, and he’s not really a friend. Friendship should go both ways.

5. She lets you know you’re second best. If she suddenly breaks a date or she’s unavailable if she gets a “better offer” from a date or a more popular friend, she’s not a true friend.

6. He criticizes you, your accomplishments, your family, your home, your job or your friends. A good friend doesn’t subject you to a constant barrage of negativity and criticism. And if you’re a good friend to yourself, you won’t accept it. A good friend may feel the need to tell you a tough truth, but even that can be stated with kindness.

7. She lets you pay for things and give her things and do things for her, but she rarely or never reciprocates. Even if there’s a difference in your financial status, a good friend will try to reciprocate with whatever she can afford: a homemade meal or treat in return for taking her out to lunch; or helping you with something in return for something you bought.

8. He flirts with your girlfriend or someone he knows you’re interested in, or he tries to steal your best friend from you. This is not a friend, this is a competitor. A good friend would be glad to see you happy and support your other relationships.

9. When there’s a problem between you, she won’t admit she’s wrong, or apologize or talk about it. She stonewalls you and tries to make you feel guilty for not liking what she did. Friends can have problems, it’s a natural part of relationships; but good friends can talk it through, work it out, apologize and forgive each other.

10. He’s jealous of your success or happiness. A good friend can support you and celebrate with you, even if you’re doing better than he is.

How to sensitively and diplomatically handle jealous friends:

• What a pain in the butt!! She’s late for lunch, she’s always complaining or whining, she doesn’t pay you back. But, she’s your friend, so what do you do? Work with her! She’s easy to teach, if you do it right. Let her know what you like about what she does, then she’ll hear you when you say you don’t like something. Use silence: if you don’t like what she’s doing or saying, don’t respond; she’ll get the message, without a word.

• Don’t be too strict about it: if she has a good reason, or it’s only occasional, cut her a little slack. But, don’t be a pushover, either.

• Don’t react to obnoxious things, but just politely ignore what he’s doing or saying, and maintain a pleasant demeanor. Be a grownup, whether he is or not. If you have to treat him like a misbehaving child, so be it; just don’t let him drag you into bad behavior of your own.

• People who react this way are usually in a lot of emotional pain about their own lives. Be as understanding as you can, be willing to listen to your friend’s feelings to a reasonable degree, but don’t let their struggle ruin your good feelings about yourself. If you can, offer the friend time alone with you, to help her feel special and important. Often, publicly thanking her for nice things she’s done will help keep her pacified.

• Understand underlying causes of bad behavior: People who have always felt competitive toward you are likely to misbehave, to get attention in that way. If someone’s behavior becomes a problem, set some limits. Tell the friend directly what behavior is unacceptable (like making nasty remarks when you’re around other friends) and let him know you can’t be his friend if his behavior doesn’t improve.

• Don’t be afraid to talk to friends about what friendship means to you: is it OK to cancel a date with a girlfriend (or her with you) because you get a better offer from a man? Because of family illness or problems? How much loyalty do you expect in the friendship, and what does that mean?

• Be honest. Lying to your friend about whether you have broken an agreement does more damage than breaking the agreement. If you do something with another friend, tell the truth don’t protect the jealous friend. It gives him a false impression.

• Handling difficult personalities takes skill and knowhow. Here’s a technique anyone can learn to use that works every time.

If someone behaves badly in your presence, giving that adult a “time out” is a powerful and subtle way of fixing the problem. Modern parents use a time out to discipline small children. An adult variation of the time out works as well on any adult friend who is acting childish or misbehaving. Simply become very distant and polite around the person who is not treating you well. No personal talk and interaction, no joking, no emotion. Be very polite, so he or she cannot accuse you of being unpleasant, mean or rude. There is no need to explain what you are doing: the problem person will get the message from your behavior, which is much more effective.

If you’ve never tried this, you’ll be amazed at how effective it can be to become polite and pleasant but distant. Most of the time, your friend’s behavior will immediately become more subdued around you, and often, much more caring.

Eventually, he or she may ask you what’s wrong, or why you’ve changed, and at that point you have an opportunity to tell her what the problem behavior is, and why you don’t like it. Learning to put obnoxious friends in time outs right at the beginning of unpleasant behavior can make it unnecessary to use tougher tactics at all. And if the person’s behavior doesn’t change, you can leave him or her in “time out” and you’ll be protected from it.

Adapted from: It Ends With You: Grow Up and Out of Dysfunction (Kindle and Paperback).

Tina B. Tessina, Ph.D. is a licensed psychotherapist in S. California since 1978 with over 30 years experience in counseling individuals and couples and author of 13 books in 17 languages, including It Ends With You: Grow Up and Out of Dysfunction; The Unofficial Guide to Dating Again; Money, Sex and Kids: Stop Fighting About the Three Things That Can Ruin Your Marriage, The Commuter Marriage, and her newest, Love Styles: How to Celebrate Your Differences. She writes the “Dr. Romance” blog, and the “Happiness Tips from Tina” email newsletter. For low-cost counseling, email at tina@tinatessina.com