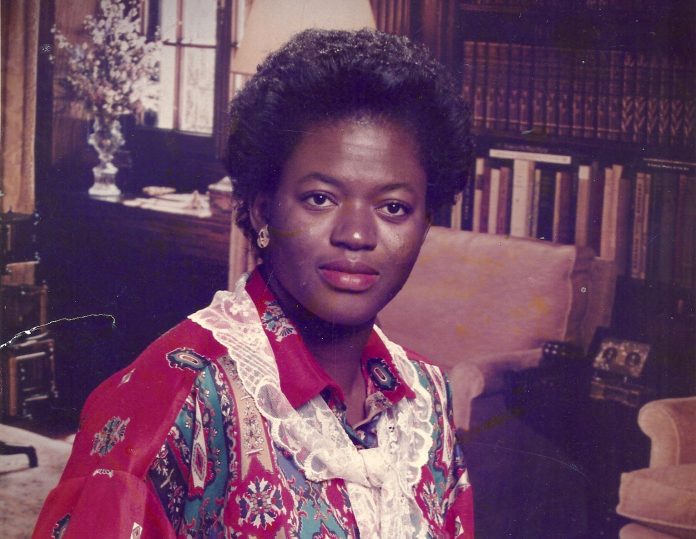 To some, it may seem crazy to forgive an undeserving person who has hurt you deeply, but Tai Ikomi says doing so actually benefits you more.

But what if that undeserving person is a drunk driver who has killed your entire family?

Ikomi has lived it, and now brings her message of forgiveness and practical Christian living to churches, conferences, seminars, and many other venues—not exactly the life the Nigerian envisioned  as the lone survivor of the April 1986 accident that killed her husband and three kids on Highway 29 in Platte City, Missouri.

As Ikomi and her family approached a construction site, they were rammed from behind at 86 mph., sending their car airborne.  Ikomi, age 32 at the time, did not know what happened—her ears echoing with the impact.  She says two men approached her and must have urged her to get out of the car, though she still cannot clearly recall the details. The next thing she knew, she found herself out of the car, not knowing how.  The doors remained jammed.

Though many people had gathered, all were helpless to either fight the flames or free the rest of the family.  Ikomi could hear her daughter Ejimi crying inside, but five minutes later, heard no more, realizing Ejimi died from smoke inhalation.  She was age 2 ½.  Also dead were Ejima’s twin brother, Tosan, older brother Temple, 8, and husband Johnny.

Ikomi, however, emerged only with scratches.  When she later inquired as to the identity of her two rescuers, no one had even seen them.  The police investigation never yielded an explanation, nor could anyone else explain how she made it out of the car.  Ikomi says she then realized the two men were angels, though she wondered why they did not also save her family.

A born-again Christian since 1971, Ikomi knew from the Bible that she must forgive James, the driver.  Though she said it remained difficult, she did it, reasoning it had to be an accident, and to err is human.

Days later, however, she saw in the newspaper that the driver had been drunk, with his blood alcohol level twice the legal limit.  Fury then set in, as she realized he had willfully decided to drink and drive.

Though this obviously shook Ikomi’s decision to forgive, she knew she had no choice but to do it anyway, because the alternative would affect her relationship with God, and she needed Him for solace.

So Ikomi forgave James in her heart, but later discovered she truly had not.  First, she felt her wound deepen when James made no attempt to contact her and make amends, leaving her to wonder if he was indeed repentant.  On the other hand, she wasn’t sure she really wanted to hear his voice at all, fearing a fresh round of emotional pain.

Second, while pursuing a Master of Theology degree at Oral Roberts University in Tulsa, Okla., about 10 months later, Ikomi shared her story with fellow student Beverly Jones, a counseling major.  Jones asked Ikomi if she had forgiven James.  Ikomi said she had, but as Jones continued probing Ikomi’s feelings, she found a lack of concern about James, as well as a refusal to think about him or even utter his name.  At first, Ikomi tried convincing Jones that she had forgiven, but Jones revealed to Ikomi that she had buried her true feelings and had not truly forgiven from her heart.

Jones told Ikomi she had to let it go, because the word “forgive” in the Greek means “to let go or release”; thus, she had to do that, then confess.  Though Ikomi felt uneasy and reluctant, her love for God caused her to forgive James right there, naming each of her family members one by one.  Her immediate pain immediately disappeared, and over time, the hurt of losing her family dissipated.

“I experienced God’s promise of peace in a world of tribulation,” she says. “The Bible became alive to me. I did not understand why the accident happened; I still do not. But one thing I do know—God is my Father and whatever may befall me, I am safe in the hollow of His hands. I can count on Him to heal my wounded emotions. He did not fail me. Forgiving James was a small price to pay compared with keeping a sound relationship with my God and for the healing I received from His hands.”

Forgiving the undeserving may seem unthinkable, but it’s actually the best thing you can do for yourself, according to Ikomi.  She says the advantages are just too great to do anything else.  You become emotionally free, laying aside all bitterness and thoughts of revenge, leaving judgment to God.  Your physical being is helped, since medical science has shown that harboring unforgiveness can adversely impact your health.  Plus, your social interactions are left unaffected.  No unforgiveness is there to cause you to lash out at others in any way.

When you realize you need to forgive, it’s not so much the words you say, but the attitude of your heart, according to Ikomi.  That’s where she made her mistake in her original attempt to forgive, merely deciding it in her mind, but still harboring ill will.  Because the heart is still deceitful (Jer. 17:9), Ikomi has since come to understand that many criteria exist to help measure whether you’ve truly forgiven from the heart, but she outlined a few.

“How do you feel in their presence, when you are with them?  Do you feel angry when you see them?  Some say they have forgiven, but we are still angry.  Therefore, there is unforgiveness,” she says.  “Another criteria is that you don’t feel like retaliating.  You no longer wish them harm.  Another is if you are willing to help them when they need your help.  Also, what do you say about them?  Sometimes, what do you say to them?  Maybe you are harsh and abrupt—because you are still angry.”

It is not crucial for the forgiver and perpetrator to have a face-to-face talk, according to Ikomi, who has never met James.  If the forgiver finds that necessary, it should certainly be arranged.  The important thing is to truly forgive.  Doing so becomes possible when you realize it is God’s command, according to Ikomi.  We sinned against God, yet He forgave; thus, we must do the same with the undeserving.

“I myself am a sinner who has sinned against a holy God,” she says.  “To forgive is to follow in the footsteps of my Father, who is merciful.  The way to forgive is to realize that God has said to forgive.

The highest authority has issued a command, so you do it out of respect for God.  Secondly, God has issued the warning.  Jesus said, ‘And when you stand praying, if you hold anything against anyone, forgive him, so that your Father in heaven may forgive you your sins’ (Mark 11:25).  But if I do not forgive, He will not forgive me.  Too much weighs on it, so I forgive, so my sins can be forgiven also.”

Ikomi’s original plan was to attend law school, but the accident turned her heart to instead pursue the  Master of Theology at ORU.  Her Bachelor of Arts was in French from University du Benin in Lome, Togo. She went on to teach New Testament and New Testament Greek in various Bible institutes and colleges. Today, she travels the world with her message of forgiveness, God’s grace, maintaining a close daily walk with Him and more, including the importance of meditating on the Bible.

For those who still feel incapable of forgiving a wrongdoer, saying it’s too charitable and undeserved, Ikomi says to do it not for them, but for yourself.  She says you will naturally feel hurt and offense because the two are “conjoined twins”—bound together.  The key is to go to a private place and  release the wrongdoer in the name of Jesus, declaring it aloud, as her counselor had advocated.

“Once I forgive the offense of the offender, the pain attached to the offense also goes away with it,” she says.  “The person no longer hurts me.  But if I want to hold onto the anger and the offense, I’m the one hurting. The pain continues unabated.  It’s like someone once said, ‘Unforgiveness is like you taking poison, and hoping the other person will die from it.’   Forgiveness is the release.”

Ikomi has published about 30 books through her self-publishing company called Triumph Publishing.  One of her books that emphasizes forgives is called: “Effective Forgiveness.”  Her first book, His Beauty For My Ashes, an account of God’s grace in her journey to emotional healing, became a best-seller and later a movie. If you would like to invite Dr. Ikomi to your church or organization or just for more information, see www.hisbeautyformyashes.com.