How I Lost and Found My Son 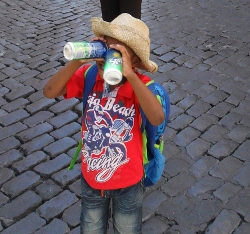 [dropcap]T[/dropcap]his will be a blessed year for all of us; I pray that we will not see what our hearts cannot bear, in Jesus’ name. I say this because if it had not been for the Lord on my side on December 10, 2011, you might not be reading this column today.

I took my children to a birthday party in a large, popular children’s recreation facility that Saturday. I sat down with four ladies, and we started talking. After eating, the children went to play in different groups. The little ones were in the company of the teenagers. Everyone seemed content.

My 4-year-old son came back to sit with me briefly. A few minutes later, I saw him watching The Magic School Bus on my iPhone. I scolded him for going into my bag without permission and asked him to return my phone immediately. Then I carried on talking with the ladies, and a few minutes later, I looked up and did not see my son. I dug in my bag looking for my cell phone and realized that my son must have taken off with it.

I rose from the table to look for him—and to discipline him when I found him. I called his older brother, who was supposed to be keeping an eye on him.  “I thought he was with you,” my older son responded. Right away I knew I had to find my little boy fast.

I walked around the building twice and didn’t find my son. I alerted security in the recreation facility, which was attached to a large shopping mall, and they began searching in earnest. Thirty minutes went by, and there was no sign of my beloved son. As I walked around, I had been confessing, “Lord, you cannot suffer me to be disgraced; You promised You will never leave or forsake me.” But after 30 minutes, panic had crept in. Butterflies threw a malicious party in my stomach. Then I began to cry uncontrollably.

I didn’t know what to do, say or think. The missing-children episodes I watch on my favorite channel Investigation Discovery were doing a real-life number on me. “Lord, please help me,” I cried.

Forty to 45 minutes later, a man brought my son to the security stand while I was describing him to more security people. The sigh of relief I let out was like none other. The man had found him wandering from one clothes rack to the other in a Dillard’s store. Unbeknownst to us, my son had left the recreation facility and wandered into the mall by himself. He first visited a toy store, helped himself to a plastic dinosaur, came out and walked in the opposite direction to Dillard’s. How he was able to do this is a mystery to me. A security person in the recreation facility was supposed to be guarding the door into the mall, but he had left his post without telling anybody. The open door to the mall got the better part of my son’s curiosity.

I thanked God from the depths of my heart for what He had just saved me, my family and friends from. What if a pedophile had lured my 4-year-old son? What if a kidnapper had got his hands on him? Can you imagine a 4-year-old walking in the mall all alone, toy dinosaur tucked under his arm, and people were passing by him without raising an alarm? What if, what if, what if, was all I could think. He lost my iPhone somewhere along the way, but life is way more important than a smartphone.

I was so shaken that when I got home that night, I held my son very tight and kept saying “Thank you, Jesus” over and over. I couldn’t sleep.

For the first time, I actually walked in the shoes of a parent with a missing child. I can’t even begin to describe the pain that accompanies each step or the anguish that unleashes a mental war in the mind of the parent. It is a horrible feeling, and I pray that none of you will ever experience this.

I dedicate this New Year to parents with missing children and pray that the Lord will bring their loved ones back to them, in Jesus’ name.