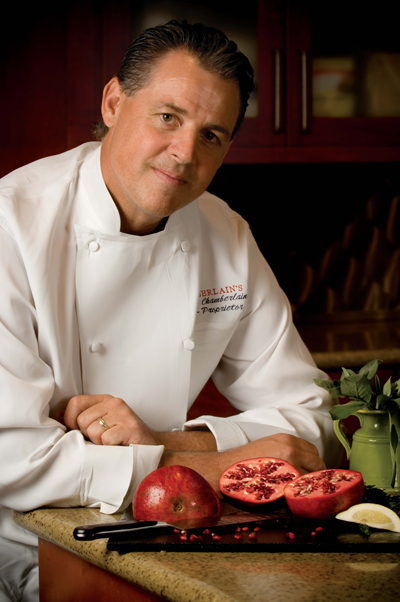 [dropcap]C[/dropcap]elebrity chef, Richard Chamberlain, loves to serve great fish and go on fishing trips with his chef friends. It makes sense, because he’s also the owner of award winning Chamberlain’s Steak and Chop House and Chamberlain’s Fish Market Grill both in Addison, TX.

Chamberlain was born in Dallas to a professional struggling father and a working mom. He grew up poor. At the age of 12, his father died unexpectedly. “I was angry at God for taking my dad and leaving my mom with four kids and almost nothing to look after us,” he revealed. Things brightened when his mother remarried. At the age of 14, he received Christ at an Assembly of God church in Kingsville, TX. Although it was a special experience, in time, he drifted in and out of his relationship with God.

As a junior in high school, Chamberlain had to choose one of two class electives: the FFA (Future Farmers of America) or FHA (the Future Homemakers of America). Having developed a rebellious nature from his family moving around so much, he opted for girls and cooking instead of boys and cattle. On the first day in the FHA class, he was the only boy in a circle of fifteen girls. His teacher asked him if he was in the right place. His answer was an emphatic “yes.” The next day and for the rest of the semester, the teacher assigned him to cook a dish every day, in a separate classroom. What Chamberlain did not know at the time was the Lord revealed his gift to him and with some additional prodding from his mother, the idea of becoming a chef knocked on the door of his heart.

After high school, Chamberlain enrolled in the culinary program at El Centro College in Dallas. While attending, a friend got him an interview at The Mansion on Turtle Creek with prestigious Chefs Christian Chemin and Dean Fearing. Chamberlain had so little cooking experience at the time, he likes to call his hiring “divine intervention.” After several years with Fearing at the Mansion and Agnews Restaurant, he moved to Los Angeles to work at the Hotel Bel Aire and learn under consultant Wolfgang Puck. He moved back to Dallas some years later to work at Ratcliffs and San Simeon restaurants and then relocated to Colorado to open the Little Nell Hotel.

Although his career direction was settled, by the age of 26 he had been through several relationships and lonely nights. One night, he got on his knees and asked the Lord to provide him with somebody that will be his mate for the rest of his life. “I was tired of being single and wanted someone to share my life with. I knew only the Lord could provide her” he said.  Soon after, he met his wife Lisa, the daughter of a Baptist minister. They got married 6 months later. When their first child was born, they knew it was time to find their faith again. They started attending church in Aspen and later at Prestonwood Baptist Church in Dallas. Today, their daughter Tori is finishing her degree in Education at the University of Oklahoma and son Stephen is a senior at Prestonwood Christian Academy. Richard and Lisa will be celebrating 25 blessed years of marriage this November.

This past June, Chamberlain’s Steak and Chop House celebrated its 20th anniversary.  The seafood restaurant opened in 2001.

“I have been incredibly blessed with both of them.  If you want to be successful in business, turn it over to Him, let Him guide you; turn to Him in prayer, be patient, let Him show you the way and most importantly, let your business glorify Him,” he added.

When asked to share tips on the way he runs his business, Chamberlain shared:
“Every day I come to work praying that the Lord helps me to let my business glorify and honor Him. There is no short cut in the culinary business. You have to hire people that know how to do things and let them do what they do well. Humble yourself not only before God but also before men. Treat your employees with respect, dignity, kindness and sensitivity. Be obedient to God’s plan and be honest in your business. If you make a mistake like a guest has a problem, make it right for him or her. If you do something out of character like lose your temper, go back later and apologize. Reduce the distractions and try to get more focused on God. Don’t be so anxious about all the stuff that has to be done,” he said.
His advice for any one that wants to become a chef is:

Chamberlain’s message to everyone is to stay grounded in the Lord. “Humble yourself before the Lord, be obedient to what He is telling you to do and be honest.  If we pray for people to receive Christ, He will do it as long as we are prayerful, faithful and wait on his timing” he concluded.