Gail McWilliams gave up her eyesight for her children’s lives

[dropcap]I[/dropcap] gave my life to the Lord Jesus Christ in my childhood. I was diagnosed with a childhood disease that the doctors said would interfere with my ever being a mother. Unmoved as a young teen because I was focused on living life to the fullest, I disregarded the dismal report until years later. It was when I married my husband, Tony McWilliams, twenty nine years later that I came face to face once again with the same looming report. We wanted children but the medical profession declared it impossible because of the childhood disease I had.

By the special grace of God, two years into our marriage, we miraculously had our first child despite the report from the doctors. Soon after, I was pregnant with our second child. It was during the second trimester of this pregnancy that the doctors said to me “You will have to choose between your baby or your eyes.” 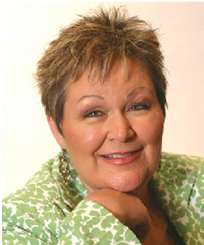 It has been faith in a God who could do the impossible that kept me engaged in hope as I gradually lost my eyesight over the years. Oddly, the same faith seemed challenged when I tried to understand where God was in my core of pain and how would I serve His purposes with this new challenge.

One night I remember crying as I faced the mixed emotions of pain, anger, fear and confusion. I had remembered a verse that I had buried in my heart. It had become my life line at that moment of crisis. It was in Psalms 56 and it stated, “Lord you saw me when I was tossing and turning in the night and every tear I have ever cried you kept it in your bottle. But when I called on the name of the Lord the tide was turned and all my enemies scattered; for this one thing I know–You are for me.

It has been in the tumultuous storms of life that I have found being anchored to His word and knowing He is faithful and His love steadfast that I have been kept in life’s storm. I use to fear that I had no value to my family or anyone else because my ideal world had been altered. Now I realize how much of an advantage I have over a world that is dependent on things they see. The Bible says that eyes that see are temporal but eyes that see from the heart are eternal, I was even more encouraged. My faith was positioned on a higher platform because it too works beyond sight.

I have learned to value the team because I know that any true success is coupled with others. I have learned to listen and not simply react to what I may see. I find that most people struggle with some form of blindness since they see only what they want to see.

My passion is for parents to see the potential of the home and the destiny that each child has for this generation. I found the twin to faith and it is hope. That is why I always carry my car keys in my purse. I know that one day my eyesight will be restored and I will drive myself back home. Hope always expects the best.

When people see me they see a woman of Hope clothed in grace. I have times of fear and frustration. There is no depth of pain that compares to the inability to see the faces clearly of my children. My husband never seems older to me and I visualize him as the young man I once married. I picture others with a great hair day and loosing ten pounds. Most like what I see.

Often I am asked if I would have been used on such a big scale if I had not lost my eyesight. This question makes me sad because I would hope that I would give my life away to serve others no matter what. However, my story has given me a platform and voice in the midst of challenges to speak into the lives of others a message of hope. Don’t give up! “Life is the challenge. Figuring out how to jump obstacles is the adventure. Finishing well is the prize.” Each terrain of life has value. The joy of knowing Christ is that He is near you at every turn in the road. You are not alone!

My children Anna, Lindey, Holly, Lydia and Connor are touching the world in their respective ways. The challenges of being a blind mother is both good and bad. I can always see a bad attitude but I fail to see the details many times. My husband was nervous when the older three children were learning to drive, but it never bothered me. I never saw the tree either! Home chores and projects become a team effort; reading a book aloud together as a family becomes a memory; and learning to communicate well becomes essential. Each child is seen to be a gift and I would choose them again in a heartbeat. They will go on to impact generations yet to come; which I can see from my heart’s view.

I wrote a book called “Seeing Beyond” in 2006. By the grace of God, the book has been carried to 38 nations. It has been translated to Spanish, Russian and Japanese. In the book, I remind my audiences that “When you have vision, you can see even in the darkest places of life. Eyesight is not vision.” Little did I know that our story would go literally around the world. Just because a storm comes does not negate the bright horizon that lies just ahead. Faith declares in the face of fear, despair and hopelessness that He is able. I hope all who hear my story will be inspired to reach for more and not give up. I have a second book called “Engaging the Heart: Understanding the Treasure Within.”

More about Gail Williams as culled from her website.

Gail McWilliams is a compelling author, seasoned speaker, and host of her own national radio feature: “Seeing Beyond with Gail McWilliams.”

As an inspiring, motivating and humorous professional speaker, she empowers others with a renewed reach toward dreams and purpose they once thought impossible. Gail has an instinctive ability to capture and lift the spirits of people, no matter the age or position. She demonstrates a unique personal impact on listeners who come away with renewed energy and new ideas. She has extensive experience in public speaking, television, and radio, and as a recording artist and life-coach.

Gail’s versatility generates invitations from a wide variety of organizations, nationally and internationally. She also serves as a stellar keynote speaker for many fundraising efforts around the nation.

Gail speaks at conferences, universities, corporations and faith-based organizations. Some events have included Amsurg, The Ziglar Corporation, LaQuinta, Focus on the Family and recently alongside Governor Rick Perry of Texas. She has graced such universities as Texas A&M, Oklahoma Wesleyan, and Dallas Baptist University. She is the recipient of the first Hope for Life Award given by The Justice Foundation.

Gail’s reach is global. Her love is people, and her passion is leaders. Her first book, Seeing Beyond, with foreword by Zig Ziglar, and her book, Engaging the Heart, have captured hearts around the globe, leaving them wanting more. Both books have also been printed in Spanish. Her newest release is B12: Doses of Encouragement. Her story is also included in Zig Ziglar’s newest book,Embrace the Struggle.

Gail has also gained international experience in Mexico where she spoke at multiple events, including Colima University. She appeared recently in Spain, where she spoke fifteen times in eighteen days to a variety of audiences, including ruling members at the Parliament in Barcelona.

She resides in Dallas with her husband, Tony, and their children and grandsons.

To find out more about Gail, visit her website: www.gailmcwilliams.com.