Fire In Uganda School For The Blind Kills 11 Students 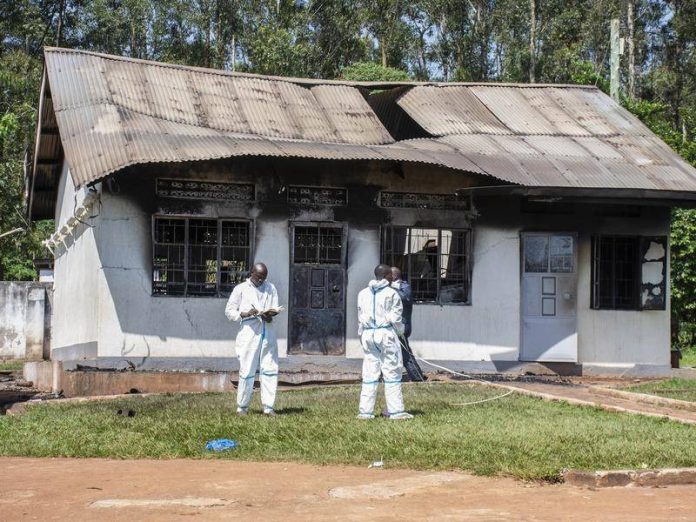 A devastating fire broke out in a girl’s dormitory at the Salama School for the Blind boarding school in Uganda’s central Mukono district. 11 girls, ages 6 to 13 were killed in a room that was occupied by 17 children. The injured children have severe burns, mostly on their chests, arms, and legs. Four of the children were sent to the nearby Kiruddu National Hospital in the capital city of Kampala. 70 visually impaired children are enrolled in The Salam School for the Blind which was founded in 1999 and is located in the town of Kisoga.

According to a statement from the Uganda Police Force, police in Uganda are investigating the cause of the fire. A Kampala deputy police spokesman Luke Owoyesigire said: “The cause of the fire is currently unknown. But so far, eleven deaths as a result of the fire have been confirmed. While six are in critical condition.” He also informed the public the police already sent out a forensics team that will carry out DNA tests before the bodies of the dead children are handed over to family members.

Hudson Kiyaga, the town’s mayor, told VOA the fire at the isolated school has left members of the community in shock. Kiyaga said the matron has no idea how the fire started even though the school’s power switch is in her room. Fortunately, she escaped the fire even though she couldn’t rescue any students.

A school board member, Charles Nkuse, said the school headmaster telephoned him and broke the news of the fire and death of the students at 12:15 a.m. Nkuse also mentioned a previously planned visit to the school on October 28th by Britain’s Princess Anne and Uganda’s first lady, Janet Museveni. “We expect to get the first lady, the daughter of the late Queen, Princess Anne, and the husband. They were to be with us on Friday, but I really don’t know what will take place,” he said. “But, we are still in terrible condition because, I think, the police are bringing back the dead bodies from Mulago and the parents are here.”

Education Minister Joyce Kaduchu said “All of us are really heartbroken, our education system gives everyone an opportunity, regardless of what physical challenges one has. We have lost 11 children under very unfortunate circumstances.”

There have been fires in several schools in Uganda since January this year and security officials have yet to determine the cause of the fires.

Sidney Cole writes about news happenings around the world.