A church warden and Baptist minister’s son, who is also an attempted murder suspect claimed messages he wrote on a pensioner’s mirror were “from God” in a sophisticated ploy to get her to sign away her $390,000.20 house in her will, was heard in Oxford Crown Court in England.

Benjamin Field, 28, is said to have scribbled the biblical words – decorated with small crosses – in white marker at the home of Ann Moore-Martin, a 83-year-old pensioner and lover. Field was specialized in manipulating churchgoers into pledging money in their wills before staging “accidental” deaths.

Moore-Martin, a devout Catholic and former headteacher  at a Catholic primary school was overcome with religious zeal after reading “Ben needs prayer and he loves you” and “All that you give him will be returned tenfold.”  Smith admits to deceiving the pensioner, who was also his neighbor in the village of Maids Moreton, Buckinghamshire, into believing he was in a relationship with her.

Field lied to her he received the same messages and Moore-Martin eventually left him her expensive home on Manor Park in posh Maids Moreton, Buckinghamshire, England.

The pensioner, who was unmarried and had no children, died of natural causes shortly afterwards in May 2017 though it is alleged she was driven to her grave by Field.

Prosecutors said Peter Farquhar, 69, died in October 2015 after being suffocated by Mr Field, who he had been in a relationship with.

A jury of six men and six women at Oxford Crown Court were shown pictures of the messages, which Field took himself. He and Martyn Smith, 32, are on trial for attempted murder of another pensioner and neighbor.

Prosecuting officer Oliver Saxby QC said: “Field and Smith embarked on a campaign of ‘mirror writing’. That is to say, using a white marker such as is used on boards outside restaurants, they wrote things – messages – on Moore-Martin’s mirrors at home. 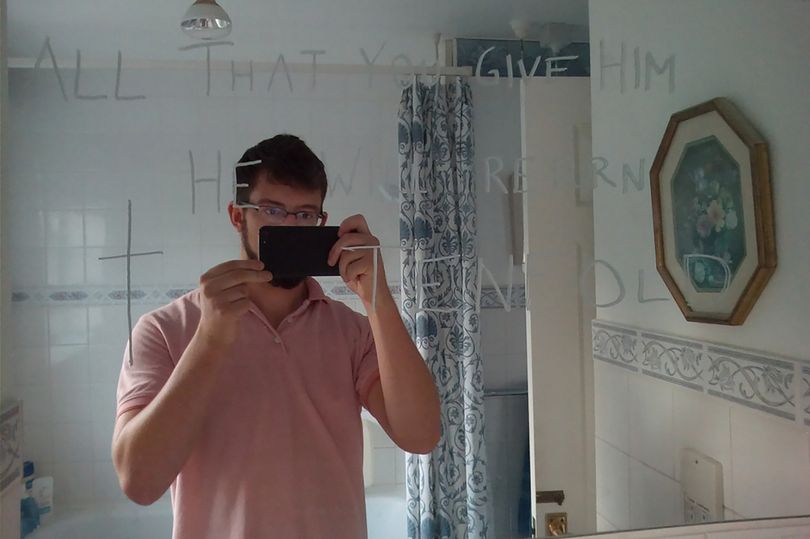 “These messages were biblical in nature and Moore-Martin ended up believing they were messages from God – Field would speak of having received them too.

“Among other things, the messages were telling Moore-Martin to leave Field her house, that if she did, she would be doing the will of the Lord. Which is what she duly did.”

The court heard Moore-Martin contacted her lawyer to make Field a benefactor to her will, citing the mirror writings as a reason for her decision.

High Court judge Mr Justice Sweeney was told the lawyer expressed her concerns but the woman changed her will nonetheless.

He has admitted the three fraud counts and the burglary.