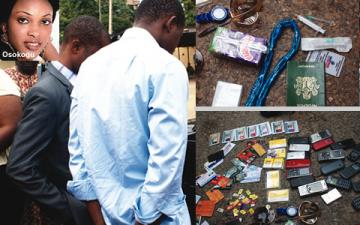 [dropcap]W[/dropcap]e all know there are wolves in sheep’s clothing, green snakes under the green grass, and all that glitters is not gold. But for some reason, when it comes to new friends, rather than do our homework, we’re quick to trust them until their true motive is exposed and our heart bleeds from the wound of betrayal. Some people are not that fortunate; the blow they received was so fatal, and they ended up six feet under.

A few weeks ago, I was watching the incredible story of Omaima Nelson on the Investigation Discovery channel. As what she did to her husband of two months unfolded on the screen, I was in so much shock that my mouth stayed open long after the story ended. Omaima, a 24-year-old Egyptian model, met and fell in love (or so he thought) with Texas-born Bill Nelson, who was twice her age. She seemed to have everything Bill was looking for in a woman. He was so carried away that he married her a month later.

What happened next is heart-wrenching—and sickening. On their first Thanksgiving weekend in 1991, exactly two months after their marriage, Omaima’s motive came to light in one of the darkest ways anyone can imagine. She bludgeoned and chopped her husband, ground some of his body parts in the garbage disposal and stashed the rest in trash bags and moving boxes. She didn’t stop there, but that’s where I’ll stop.

A few days after the program ended, I was still wondering: How in the world did this happen? How did the most horribly unfriendly friend enter Bill’s world? What must have gone on in Bill’s mind when she struck her first blow? How could he have prevented this from happening? My questions were interrupted by yet another story of betrayal that a dear friend of mine sent to me.

Cynthia Osokogu, a 24-year-old Nigerian-based postgraduate student and thriving clothes retailer, was last seen on July 14, 2012. She was reported to have traveled from her residence in Nasarawa State to the bustling city of Lagos to buy merchandise for her boutique. Reports have it that Cynthia had been chatting with some new third-year college “friends” she met on Facebook some months earlier. Many conversations later, she developed a friendship with them and a level of trust. When they told her they had a great discount on some goods for her boutique, they succeeded in sparking her interest. The story has it that they bought her an airline ticket to come see for herself. I don’t know what she was thinking, but I find it a bit strange that she accepted this offer from people she’d never actually met. On the day she arrived in Lagos, they picked her up from the airport and drove her to the hotel room they’d reserved for her. Inside that room, these vicious wolves sprung out of their sheep’s clothing. They drugged, robbed, and raped her for 12 hours and ended up snuffing the life out of her for no apparent reason.

A hotel worker found her body some hours later, and no one had any idea who she was, because her killers had already made away with her cell phones and all the contents of her handbag. Her body was taken to the morgue.

Meanwhile, her family and friends began earnestly searching for her, to no avail. A serious investigation was launched, posters were placed in print and online, and, to cut a long story short, one of her killers absent-mindedly answered her phone, and the authorities traced his location. Her missing persons report had been submitted to the police in that area, and that’s how the morgue identified her as the “Jane Doe” who’d been brought in a month and a half earlier.

To God be the glory, her killers were caught soon afterward. They confessed to her killing and shocked many people when they declared that Cynthia, the only daughter and the youngest in her family, was, in fact, their sixth victim.

Her new “friends” were unfriendly animals with a mission to kill. This could have happened to anyone. We need to be careful about how we jump into friendships. We need to exercise caution and wisdom in befriending people via social media. The sense of comfort and trust it offers can be misleading. In all, we must always take security measures physically and spiritually to protect ourselves. We all have one life to live, and how we live it matters a great deal. Have a happy and safe month!

May E. Olusola is the Publisher of MannaEXPRESS.

Facebook
Twitter
Pinterest
WhatsApp
Previous article
A husband’s chronicle of his wife’s battle with breast cancer
Next article
Mother And Son Born Without Arms, Use Their Feet To Clean Their Teeth, Eat, Play Computer Games And Wash up