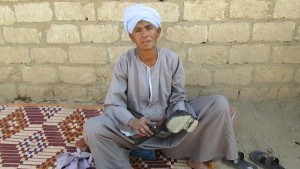 For 43 years, 64 year old widow Sisa Abu Daooh, made a living for her daughter and grandchildren by working in disguise as a bricklayer, cement bag lifter and shoe shiner among other jobs. Daooh lost her husband at the age of 21 while pregnant with their daughter Houda. She had no income and had to find a way to avoid her daughter going hungry as reported by Al Arabiya.

Daooh was honored this week as the “ideal Egyptian Mother” and awarded “woman breadwinner” by the provincial government of Luxor in Southern Egypt.

Born into a poor family and a culture that frowned on women in the workplace, Daooh decided to dress as a man and do male dominated jobs to support her family. Wearing a “Jilbab”, (a loose local robe) a male turban or a male hat known as “Taqiyah” and black masculine shoes, Daooh worked to put food on the table. Years later, she married off her daughter to a man who later fell ill and couldn’t work. Her daughter Houda said “my mom is the one who still provides for the family. She wakes up every day at 6 a.m. to start polishing shoes at the station in Luxor. I carry the work kits for her as she now advanced in age.”

“I preferred working in hard labor like lifting bricks and cement bags and cleaning shoes to begging in the streets in order to earn a living for myself and for my daughter and her children,” she said.

“So as to protect myself from men and the harshness of their looks and being targeted by them due to traditions, I decided to be a man … and dressed in their clothes and worked alongside them in other villages where no one knows me.”

Daooh still earns a decent income from polishing shoes. She gave thanks to those who helped her along the way. “Thanks to everyone who has helped me. I hope to see Egypt in a better situation” she added.