Although 21 year old Hu Huiyan is disabled with cerebral palsy and can only control her left foot, she has shocked the world by using just her toes to write 60,000 words of a fictional novel.

Huiyuan was brought up in a village in the Anhui province in eastern China among regular kids that struggle to go through formal education.

In as much as her condition does not afford her the convenience to do much, Huiyuan’s  determination to overcome and succeed drove her to use television subtitles to teach herself how to read and write.

She can now effortlessly write twenty and thirty words a minute and has completed the 6th chapter of her eight chapter book despite being secured to her wheelchair with a belt to keep her stabilized. 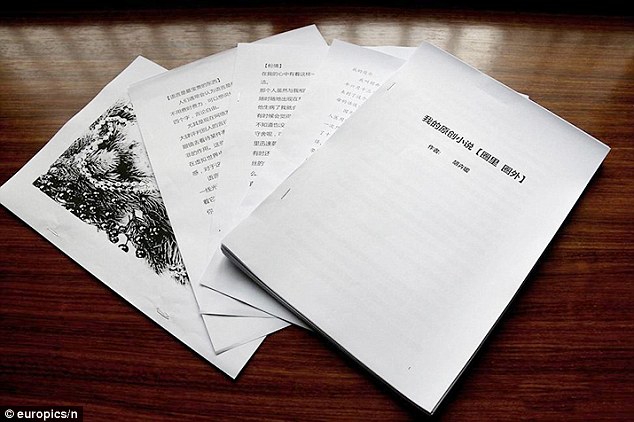 Interviewed by local TV, Huiyuan said: ‘I teach myself.

‘I’m so fascinated by the opportunities that being able to read presents.

‘Being able to write allows me to communicate with so many more people.

‘I’m not a genius but I’m very focused. When you have a disability like this, you have to learn patience.’

‘When Hu was born the medics said she wouldn’t leave more than a couple of days, but she did,’ her father Peng said.

Both parents did not know what her problem was at birth until they found out ten months later that she had cerebral palsy.  “The only sections of Hu’s body she could move were her foot and head, but she was unbelievably determined”  her father added:

Huiyuan ultimately learned to carry out all sorts of daily duties using just her foot.’

According to her mom Sun, “Hu’s determination had been noticeable from an early age while learning to communicate, which was a bit slower and also more painstaking as compared to a normal kid. Hu would at times repeat a word many times until she could say it properly” Daily mail reported.

Huiyuan isn’t the only case of a handicapped Chinese person who, in spite of the lack of amenities for people with disabilities in the country, rose above the huge barriers that confronted him on a daily basis. Last September, 29-year-old Wang Qiang, who was diagnosed with cerebral palsy, accomplished his dream of becoming a part of the professional boxing contest when he signed up in the eastern city of Shanghai.

Qiang was able to master some basic boxing skills with the help of his dad. The Shanghaiist reports he was able to join the boxing competition and complete his first-ever professional boxing game.

Huiyuan and Qiang are showing the world that when there is a will there is definitely a way.