Disability is not inability 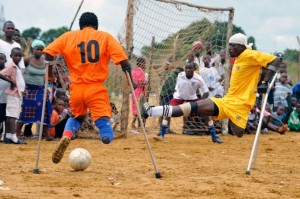 “Start by doing what`s necessary; then do what`s possible; and suddenly, you are doing the impossible” Anonymous.

It is not uncommon to see some physically challenged individuals beg for alms from place to place or stationed at vantage points hoping that a “good Samaritan” will peradventure pass by and give them monetary assistance. However, truth be told, this phenomena is not the full picture. Some physically challenged persons have taken the bull by the horn to chart a noble cause for themselves and the society. This is true in many parts of the world.

This article draws inspiration and lessons from the life of seven ordinary yet enigmatic personalities who faced odds of monumental proportions but refused to throw in the towel. These persons were severely handicapped in one way or the other but refused to allow their circumstances determine their destinies. They made the quality decision to wither the storms, accomplishing phenomenal feats, their glaring challenges notwithstanding. It is my hope that the individuals whose accomplishments will be briefly considered will bring much encouragement to you irrespective of your current status in life.

Fanny Crosby: an American born March 24, 1820 and named Frances Jane Crosby. She died on February 12, 1915 at the ripe old age of ninety four. Fanny was blind for most of her life. She was a lifelong Methodist, one of the most prolific hymnists in history, writing over 8,000 hymns and gospel songs. She was a lyricist, poet and a mission worker. She displayed great musical talent in spite of her physical handicap, in her ability to play the piano, harp, guitar and organ.

Hellen Keller: an American born in June 27, 1880 and died on June 1st, 1968. She was the first deaf and blind person to earn a Bachelor of Arts degree in America. She was a notable author, political activist and a lecturer.

Joni Eareckson Tada: She was born on October 15, 1949. Joni is an evangelical Christian author, singer, artist, radio host and founder of Joni and Friends, an organization “accelerating Christian ministry in the disability community”. She became quadriplegic following an accident as a teenager. She has written over 40 books, recorded several musical albums and paints her artistic works with her teeth.

Esref Armagon: A blind painter from Turkey. Esref was born without eyes, and taught himself to read, write and even paint. He has been painting with oils for over thirty five years.

Farida Bedwei: A Ghanaian but born in Nigeria and growing up in Grenada and the United Kingdom, moved to Ghana with her family in the late 1980s. She developed cerebral palsy, a condition that makes full control of her body`s movements difficult, if not impossible. She however defied all the odds to become an author and one of the top software engineers in Ghana.

Stevie Wonder (Stevland Hardaway Morris): He was born on May 13th, 1950. He became blind shortly after birth. He is a musician, singer-song writer, record producer, multi-instrumentalist. As child prodigy, he has become one of the most creative and loved musical performers of the late 20th century. Stevie has recorded more than thirty United States top ten hits and received twenty two Grammy Awards, the most awarded male solo artiste, and has sold over 100 million albums and singles, making him one of the top 60 best selling music artiste.

Nick Vujicic: An Australian born on the 4th of December, 1982. He earned a double Bachelor`s degree in Accounting and Financial Planning from Griffith University. He is an Evangelist, Preacher, Motivational Speaker, and Director of “Life without Limbs”. He was born with tetra-amelia syndrome, a rare disorder characterized by the absence of all four limbs (He was born without arms and legs).

It is my firm conviction that if these physically challenged individuals refused to sink into the depths of despair and depression but made the quality decision to forge ahead in life, achieving seemingly impossible feats, then no one has the legitimate excuse to give up in life. Winning in life is an absolute possibility irrespective of one`s physical handicap, geographical location, family background or educational background. You were born to win. Greatness is resident within you. Dare to be a solution provider, a problem solver and a burden lifter. Yes, you can. Dare to dream big dreams and give it your best short. Before you know it that which you thought was impossible will become a reality in your life.

I am a freelance Christian writer, editor and proofreader based in Ghana. I hold a Bachelor of Arts degree in Theology from the University of Wales, United Kingdom and a Higher National Diploma in Marketing from Tamale Polytechnic, Ghana. My blog: http://theroyalwordsmithgh.wordpress.com and my contact email is: dudelda3@yahoo.com.