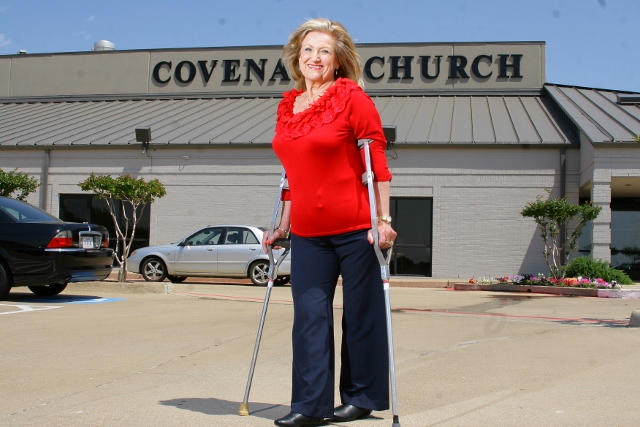 [dropcap]M[/dropcap]ost would give anything to make it in Hollywood or Broadway, and Ann Foster of Hurst, Texas, knew this was her destiny as a singer. Today, however, she is grateful that God had other plans.

Her introduction to singing began at 4 when she was hospitalized for polio in Atlanta—in an era when the disease meant severe debilitation and sometimes death. Foster was not expected even to live, but instead the disease stole most of her youth. Today, though Foster wears a brace on her left leg, uses crutches, and calls her legs “pretty deformed,” she has never stayed down physically or spiritually.

It began with a fever for several days, rising to 104 for sustained periods, which burned her nerve endings. Eventually, she became paralyzed in both legs and one arm and was severely crippled, she says.

Because polio patients were often quarantined, Foster spent considerable time alone in the ward. Her mother was only allowed to see her weekly for two hours, and her father was away in the Marine Corps. Foster also had a brother who was born when she was about 10 years old.

Her isolation remained from age 4 till about 12, causing emotional pain along with the physical pain. Though she knew her parents loved her, she could not fully understand why she was left alone so much.

“That was my circumstance as a child,” Foster says, “but I knew Jesus was with me. I knew my parents were not rejecting me, but it was still lonely. Later, when I had children of my own, I came to understand that it was probably more difficult for my mother to leave me than it was for me to be left alone.”

Through these years, Foster reached out to God, taking her mother’s words to heart. “Mom said, ‘I can’t be with you, but Jesus will be with you, so you talk to Him.’ So I developed a relationship with Jesus,” Foster says. “He became my best friend and helped me cope with my crippled body day by day. So I knew He would help me, whatever the circumstances.”

Plus, her mother had brought her a record player, so she would sing all the time, often making up songs and singing requests. She learned to sing while lying on her stomach in a full body cast, an ordeal she faced three times.

“When I sang, I’d feel the warmth of God’s presence through the songs, that He had an angel with me,” Foster says.

She continued singing while in and out of the hospital throughout her childhood. Often in excruciating pain, Foster underwent 13 surgeries in all. After each time in a body cast, she had to learn to walk again because of the resulting muscle atrophy. “Just to stand up was a major task whenever I was in a body cast for so long,” she says.

After surgery to correct scoliosis in her left hip, she finally got to go home. Then she fell and broke her right leg, putting her in a full leg cast with her limb extended. All the time in a wheelchair then undid her hip surgery, leading to more pain and discomfort.

At about age 10, Foster finally got relocated to an Atlanta hospital closer to her parents in an Atlanta suburb, but it only happened after an orderly inappropriately touched her in her wheelchair during movie time in the ward. A nurse later overheard Foster telling a fellow patient, and the orderly was arrested.

Seeing her parents more frequently changed her life for the better, she says. It meant less loneliness and sense of rejection and more security, love, and care.

About a year later, Foster was water-baptized. Through her teen years, she had what she called an up and down Christian life. “I called myself a chronic re-dedicator,” she says with a chuckle.

Since TV was unavailable in her ward, Foster read frequently, loving to pore over the encyclopedia and even the dictionary to learn words. Home schooling didn’t exist, but library books were circulated at the hospital, which Foster used extensively. Eventually, her health improved sufficiently for her to attend public school.

In high school, she studied with good voice teachers and became an accomplished soprano, seizing opportunities to sing with the Atlanta Pops symphony, perform the National Anthem at ball games, and appear before various churches, civic groups, and at weddings.

Foster was called to the ministry at age 16 and wanted to be a music minister. At age 18, she received a voice scholarship to Shorter 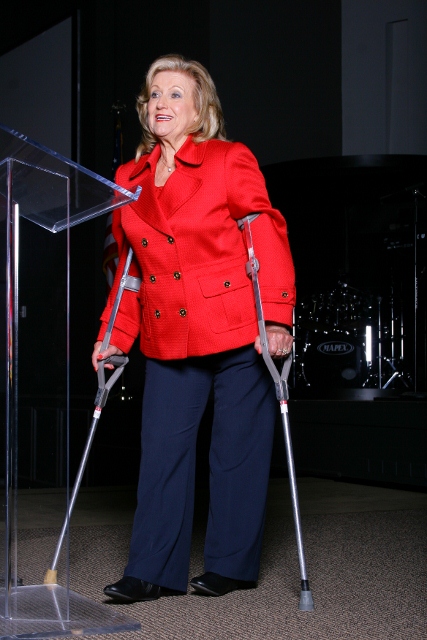 College in Rome, Georgia, where she met future husband Carter, marrying in June 1961. They immediately began senior pastoring, planting churches in Kentucky, Indiana, Colorado, and Texas until 2006, when Carter was diagnosed with Parkinson’s disease while they pastored Colleyville Christian Fellowship. At that point they contacted Covenant Church of Carrollton to request a merger. Today, the Fosters are staff pastors at what has become Covenant Church of Colleyville, one of five Covenant satellite churches in the Dallas-Fort Worth area.

In charge of adult education, the Fosters preach occasionally but primarily devote themselves to marriage counseling. In 2006, Foster obtained a Ph.D. in theology online through the University of Honolulu.

The Fosters have five children, 15 grandchildren, and two great-grandchildren. Foster wasn’t sure she could even have children, let alone properly care for them. Just holding a baby posed a challenge, but she pulled it off, even while living in two-story homes.

“It’s a miracle that the Lord helped me know what to do and how to raise my five children,” she says. “It wasn’t easy as a handicapped mother. Today, though, they’re all wonderful, productive, God-fearing adults, and I’m proud of them.”

Foster believes that had she wound up in show business, her life would have turned out very differently. Instead, she says, God used her disability to lead her into her true calling.

“My husband used to tell me I was the little lamb that God had to hobble to keep me off Broadway,” she says. “Instead, He led me to work in the church. Nothing is more challenging. Nothing is more rewarding than saving a marriage, when you get one on one with a couple and see them changed. It’s such a blessing to me.”

Though Foster fell in 1999 and crushed her good leg, forcing her to rely more on her wheelchair, she says she still leads an active life—working full-time, going shopping, and traveling. She has even found a way to snow ski, ride horses, and ballroom dance with Carter, doing everything she can as an outlet for her daring nature.

Foster constantly practices what she preaches to the handicapped—never allow your disability to limit you. “Your handicap should not ever define you,” she says. “We should be defined by our response to it, and the way we continue to worship and praise the Lord and be grateful in all circumstances.”

It’s all part of her key message, centered around 2 Corinthians 11:30 and 12:9—only boasting about the things that exhibit weakness, and recognizing that’s how God’s power works best.

With this perspective, Foster has never had room for anger or bitterness, always seeing God at work through adversity. She has never praised God for her suffering, but in spite of it, firmly believing that all things do indeed work for the good of those who love the Lord and are called according to His purpose.

“I really do believe this,” she says. “The more you can praise Him in spite of your circumstances, the more His purpose is revealed in you and you can help others. It’s Christ in me that touches people and is the hope of glory. If this vessel wasn’t broken, He wouldn’t be able to be the glory that shines from me. He uses me, and I’m so thankful for that.”

And Foster has maintained her perspective, even when seeing others she personally prayed for receive healing. When she told God it was her turn to receive, she unquestioningly accepted His answer.

“He said, ‘You take those thoughts captive and focus on what I have done in your life and what you’re believing me to do.’ He’s just chosen to use me to encourage people who are still handicapped and who still have disabilities to deal with.”

Developing a relationship with the Lord, according to Foster, is the reason she believes she has been able to overcome. It’s all about keeping your eyes on Him and continually praising Him, remaining grateful in all circumstances.

“I know Him,” she says simply. “I know Him personally. I know that He knows me. When you fight with questions like, ‘Why me?’ and ‘Why haven’t you healed me?’ we have that temptation to doubt that He loves us. But I know that He does love me and He does care about me. And He loves me even more because I’m His little crippled lamb.”