Death Struck In The Twinkling of an Eye 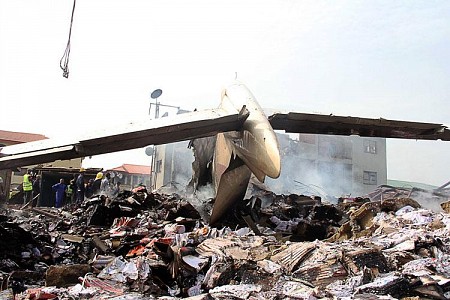 [dropcap]I[/dropcap] can bet Maimuna Anyene, a human resources manager at United Technologies Corp. in West Hartford, Connecticut, was more than excited about her upcoming trip to Nigeria.

Although she was going for her younger brother’s wedding, it was also the first time she was taking her four young children home to her native Nigeria since her relocation to the United States 12 years earlier. On April 30, 2012, she bade farewell to her friends and neighbors as she and her family boarded an international flight to the capital city of Abuja, Nigeria.

Captain Peter Waxtan, a Fort Lauderdale-based former Spirit Airlines pilot for 12 years, accepted an offer to fly for Nigerian-based,
Indian-owned Dana Air in March 2012. His new job entailed a rotation schedule of 30 days of work and 15 days off. His time off was three days away, and I can only imagine he was looking forward to spending precious time with his family and friends in Florida.

Sisters Jennifer and Anita Onita of Missouri City, Texas, were also on their way to attend a wedding in Nigeria. Jennifer, 28, an accomplished engineer in both aeronautics and defense, recently worked in aeronautics engineering for a NASA contractor while pursuing a graduate degree at the University of Houston. Her younger sister Josephine Onita, 23, an accounting graduate of the University of North Texas, took over her father’s accounting practice upon graduation from college and grew the business from a single location to four thriving locations throughout the Houston area. They had a promising future, beautiful smiles, a tight family bond, and a great relationship with the Lord. Their parents Solomon and Lola Onita are pastors of The Redeemed Christian Church of God in Missouri City, Texas.

On Sunday afternoon–June 3, 2012–circumstances brought all of them together. Maimuna and her family of eight (husband Onyeka, their four children, her mother, and two cousins), Jennifer and Josephine Onita, and Captain Peter Waxtan boarded a McDonnell Douglas MD-83 for Dana Air Flight 0992 from Abuja to Lagos—Nigeria’s biggest city. Waxtan was the pilot. The Anyenes attended church that morning, and after seeing some relatives, they set out for the airport to begin preparations for her brother’s wedding, which was scheduled for five days later. The Onita sisters were also looking forward to the wedding they were attending. One hundred forty-three passengers boarded the plane with them. There was a teenage girl and her mother, who was on her way to India for heart transplant surgery. Pastor Ayodeji Cole and his wife were on their way back to their ministry’s headquarters.This particular flight is a flight that will remain etched in the memory of millions of people for years to come. Just minutes before reaching its destination, the aircraft lost power in both of its two tail-mounted engines, after which Waxtan declared an emergency. At exactly 3:43 p.m., the plane crashed into a two-story building in a densely populated residential area in Lagos and exploded in flames. All 146 passengers and seven crew members were killed instantly. Some people in the buildings and environs were killed also.

In one of the apartments affected, a family of five had just come back from church. The parents sent their three children on an errand to buy something. By the time the children returned, the unthinkable had happened. The building was on fire and both parents were dead.

Just like that, the Anyene family of nine; Anita and Josephine Onita; Captain Waxtan; the co-pilot; the flight crew; and the passengers were gone forever. Death struck in the worst possible way.  Among those lost was a flight attendant who was to be married in July; the son of the former vice president of Nigeria; the spokesman for the Nigerian National Petroleum Corporation; three generals; six Chinese businessmen; and so many others. The pain from the news was almost unbearable. The whole nation and many sympathizers from different parts of the world were thrown into shock and mourning. May the souls of these precious people rest in perfect peace.

Dear Reader, are you making the most of every passing day? Do you have it in the back of your mind that it can all be over in the twinkling of an eye? If you are called to glory today, is your house in order? These are the questions I have been addressing ever since, and I hope you will take the time to address them yourself. It is well with all of us, in Jesus’ name.

Until next time, keep making the most of every day.

By May Olusola, Publisher of MannaEXPRESS.