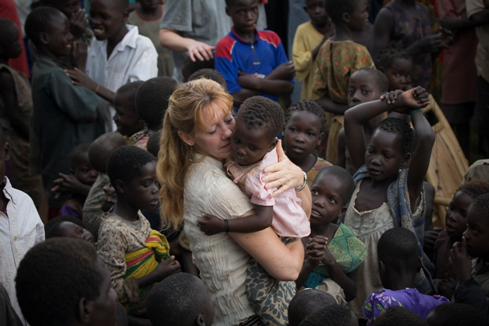 My maternal grandparents were missionaries in China for 30 years and my mother was born there. When the Communists invaded Shanghai, my grandparents and their children were taken to a prison camp. They were later released as exchange prisoners of war. In 1960, my parents went to the Philippines as Bible translators, living in a militant Muslim area, where I grew up. Forty five years later they are still serving the Lord as translators. Growing up as a missionary child in the Philippines helped to shape the longing of my heart to help the poor, the oppressed, the widows, the orphans, and those who are victims of war and suffering.

I came back to the United States as a teenager, received my nursing degree and began therapeutic foster parenting for emotionally disturbed and traumatized children. I continued with that ministry for the next 20 years. In addition, I worked as a nurse in home health and hospital settings, as well as opening a nursing care center for patients with Alzheimer’s disease. I also served on my home church staff in administration for several years, in the capacities of leadership training, evangelism and discipleship coordination and city wide prayer ministries.

In 2002, the Lord opened the door for me to serve in Uganda. I was an interim principal of a Bible College southern Uganda and had the oversight of 42 portable Bible schools in 5 east African countries. During that year of service, God began to answer the cry of my heart, “Lord, let me lay my life down for You, where no one else wants to go, and to do what no one else wants to do.” The doors opened for me to go into war-torn northern Uganda, and there I found the place I had been praying for. I fell in love with the Acholi people and began to see God’s vision to bring His glory out of the ashes in the country.

I went back to my home church in Norman, Oklahoma, and shared my heart with them. As they prayed for me, and sent me forth, I had 2 friends plus my church who said they would stand with me in support. That was the beginning of the little boy’s lunch that began to be divided over and over again as the ministry was birthed.

Beginning with prayer, I started living with and loving the dark-skinned Acholi people; every one of whom are as loved and valued as are our own families and children in the West. My first Acholi family, Martin and Hope Onen, joined me in building, training and equipping a staff of Acholi nationals whom God brought to us, one by one, the vision grew.

By January 2005, our little home in Gulu was known as the House of Prayer. People began joining us twice a day for prayer, hungry for the saving and healing power of God they saw in our home.

With the beginning of almost 6 months of prayer, we applied to the Ugandan government for registration as a ministry and in July, 2005 we began serving the community. There was an impressive growth explosion and I saw northern Uganda, not only as a “field white unto harvest”, but a harvest past ripe and beginning to rot if the fruit was not gathered in on time. Our greatest cry was “Lord, YOU build your church, for unless you do, we labor in vain, and hell will prevail. But if YOU build it, hell’s gates will NOT prevail!”

In response to the cry of people’s hearts around us, we began by getting Acholi Bibles printed and circulated again. A small group of about 12 people in Oklahoma offered to buy the first shipment of Bibles for us – 650 Bibles which took 5 months to reach Gulu. Since then, they have provided funds for 5,000 Bibles to be distributed in the north throughout the camps, coupled with the training we give in Bible study courses.

A few months later we opened a Bible College, with a one year certificate program and a two year diploma.

The Mission House became a classroom by day and a dorm by night. Prayer ministries began with houses of prayer in the camps, then portable Bible schools in the camps, prison ministries, pastor’s training and retreats, trauma counseling programs, crusades, medical work, discipleship and leadership training, the children’s home opened, and other community outreaches.

Jesus commanded us to “go into ALL the world and make DISCIPLES of ALL nations” (not just converts). This takes time, labor, and patience, but we are watching the Lord of the harvest mightily at work through the power of prayer and obedience. And because the gospel is universal, we, too in northern Uganda are commanded to “go into all the world.” God is equipping His people in the north to be “sent forth” into Sudan, as a mighty, militant spiritual army to “take back the Kingdom of God that has suffered violence, by force, for HIS glory and honor alone!”

The indigenous family that I am humbled and honored to be a part of, (over 60 staff at present), are fulfilling the dreams and visions within their own hearts – to see their land whole and restored once again and to reach other lands with the message of God’s restoration. As the Favor of God team serves together, we are seeing the land transformed by the power of the Living God, “one day at a time, one life at a time.”

The ultimate vision of Favor of God Ministries is for every home, village, camp, church and community in Uganda to make prayer their first priority. With an open door policy, every one is welcome to prayer meetings. To the glory of God, many prayer altars and gatherings have been built. The greatest need the ministry has is for people to pray for northern Uganda and if you are moved by what Favor of God Ministries is doing and you would like to participate one way or the other, contact us at info@favorofgod.org.