Attacked with acid for declaring her faith in Jesus Christ

[dropcap]”W[/dropcap]e are going to destroy the mouth that said no to Islam.”

A Muslim man had already thrown acid on Julie Aftab’s face and body, and with these words, his accomplice poured it down her throat.

Just 16 years old, Aftab was a telephone operator in Pakistan whose job entailed dialing numbers for customers who visited her office—little more than a booth with room for one customer. She monitored calls and received payment for the minutes used.

Raised in a Christian family with three brothers and three sisters, Aftab was no stranger to discrimination and persecution in this Islamic country. The authorities had refused her permission to attend high school, saying it was only for Muslims. Her father and some siblings had suffered beatings and had to move eight times over the years. At one point, their home was burned to the ground.

This day, however, Aftab showed up for work wearing a silver cross her grandfather had given her when she was 8. It held such importance, she never considered that it posed a danger.

When a customer saw the cross, he asked Aftab if she was a Christian. When she said yes, he replied that Christians will go to hell and right now live “in a gutter,” working only menial jobs. “I know where I’m going,” Aftab replied.

When the man countered that her life would be better in Islam, she said, “It’s already better.” When he said she worked for so little money, but in Islam she would “have everything and be treated like a queen,” she told him, “I’m a daughter of a king.”

He then put money before her, urging her to convert, adding, “I’m trying to save your soul.” She told him her soul was already saved. When he said, “Christians are in darkness,” Aftab told him she’s in the light.

When she refused additional money, he threatened and grabbed her. “He told me if I get raped, I’ll be the one to get blamed because it’s always the woman’s fault,” Aftab said. “I slapped him and told him I may be a girl, but I’m not weak. Then I told him to get out before I do something.”

He replied that he would give her one last chance, asking: “Do you think Islam is living in darkness?” Aftab replied, “You said so; I didn’t.” As the man left, his final words were, “We’ll see if your Jesus will save you.” 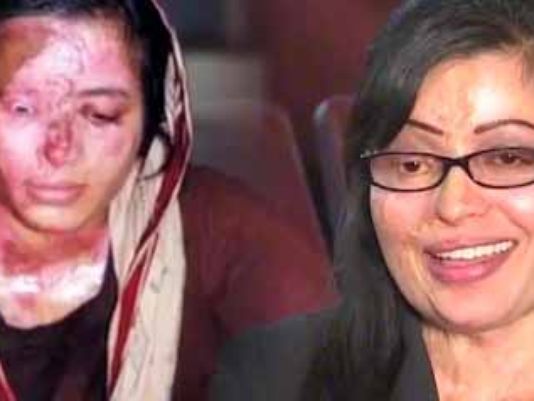 Aftab had hoped her boss would soon arrive. When she later heard the door open, she looked up, but it wasn’t him. Instead, the acid was already in the air—then it hit her, melting her skin as well as her cross. When she stood up, another man held her down as the other poured more acid down her throat. The two then fled but were later apprehended.

Aftab left her booth, crying out for help. A lady from the next block responded immediately. She took Aftab to her home, washed her wounds, then she and others took her to the hospital.

Aftab’s assailants told police they acted because Aftab had “insulted Islam.” Consequently, they were released and faced no justice. When word reached the hospital of the false allegation, her rescuers immediately turned on her, threatening to burn down the hospital if it treated her. The hospital then turned her away.

In the immediate aftermath, her burns were so severe, she was even pronounced dead after 21 days. She could not move her arms or hands. She was unable to speak or see, and doctors said she never would. Both faculties returned after just over three months, however, though today she sees only through her left eye.

She spent stints of a few days to several months in a variety of hospitals, but each time the allegation surfaced, people turned against her and would try to harm her. In one hospital, someone came at her with a gun. Another time, one of the doctors gave Aftab’s mother poison pills to administer to her daughter after Aftab refused his overtures to convert. One time, while walking in a neighborhood where she thought no one knew her, two men chased her with a pistol. She got shot in the stomach, with other bullets grazing her forehead and the top of her head.

Ultimately, Aftab and her parents received the help of a nondenominational Pakistani bishop who heard about her case. He successfully arranged for her treatment at Shriners Hospitals for Children in Houston until she turned 18. All subsequent treatment would then occur at The Methodist Hospital Medical Center in Houston.

Aftab came to the United States on her own in 2004, not knowing a word of English, unable to spell the word “and” or say “thank you,” but she credits God for enabling her to graduate from high school in 2 ½ years. She now attends the University of Houston part-time, where she is a junior accounting major as she works two jobs. She lives with a foster family and was granted asylum in 2007. Now 26, Aftab remains in contact with her family in Pakistan through Skype.

She has undergone 31 reconstructive surgeries to her face, neck, back, chest, and both arms. She still needs more on her nose, face, eyes, and neck, she says, because scar tissue is posing problems. She says she can stop breathing if she doesn’t sleep with her head in a certain position.

Aftab initially felt anger—even hatred—toward God for allowing the pain that was so great that even her father wanted her to die. But that outlook only lasted one day in the face of God’s response.

“I said, ‘God, I stood up for you. Why did this happen to me?’ God told me He had great plans for me and He knew my pain more than I do. I then felt more comfort and less pain.”

Every morning thereafter, when her wounds were dressed with honey, she made sure she had the right attitude. “I told myself whether I smile or cry, I still have to go through it, so why don’t I smile? It helped others and it helped me too.”

She never felt any hatred toward her attackers, feeling they did what they thought was right. Nor does she hate Muslims in general, believing it’s important to share gospel truth with them from the heart, then pray for them and let God work.

“As a Christian, you must not judge or hold grudges,” she says. “I do not let my past overshadow my future. I don’t hate people, but I hate what they do. I hate the sin, not the sinner. I chose to forgive but not forget and move on. If I forget, I will forget all the miracles God has done in my life. I want to remember those things.”

Aftab has completely dedicated her life to God, believing that He rescued her time after time and brought her to the United States for a concrete purpose she is not yet willing to reveal. She says the devil intended something bad, but God turned it around as the Bible promises. She has been through a refining fire that has more fully purified her faith.

“As you follow Him, you will be persecuted, the Bible says, just as it did not accept Jesus. If you don’t put gold in the fire after you mine it, then it won’t be the perfect gold it needs to be. It has to go in the fire so it will shine and be perfect.”

Though Aftab now wears a new cross, it is her scars that she calls “my jewel, my gift from God.”

“If this had not happened to me, I would not know who God is; I would never appreciate Him,” she says. “He drew me closer to Him, and now I know He will never leave me and not forsake me.”