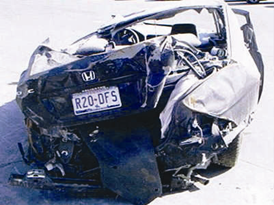 Aric Dang beat all the odds and survived a horrific auto accident because of fervent, focused intercessory prayer

[dropcap]P[/dropcap]aramedics said Aric Dang would never make it alive to the hospital after he crashed and rolled his car multiple times.

Doctors then said he would not survive the night.

They said even if he did last the night, he might never regain consciousness or recover his mental faculties. They suggested to his parents that they consider pulling the plug, since he lacked brain activity.

They were wrong again—on all counts.

None of this is a testament to Dang’s recuperative powers but to God responding to the fervent prayers of an estimated 150 friends and fellow students and youth group members throughout his ordeal.

Driving alone, Dang was headed home from basketball practice on November 16, 2005, on FM 1382 in Grand Prairie. His plan was to get ready for that evening’s youth service at Trinity Christian in Cedar Hill, where he also attended school as a 16-year-old junior.

He acknowledges exceeding the 60 mph limit in a hilly area. He said he had hung up after a cell phone chat with his best friend, discussing a song he’d just heard on the radio. He remembers the car swerving and grazing the median. His next recollection was awakening in the hospital about 2 ½ weeks later.

That’s because his airbag never deployed and he hit his head on the steering wheel, sending him into an immediate coma. Much later, he would learn that his car rolled at least nine times, coming to rest upside down in a grassy area, according to witnesses.

As Dang was rushed to the closest hospital, Methodist Charlton Medical Center near Duncanville, word of his condition spread rapidly. Mahogany Dilonga, a friend of Dang’s since sixth grade, heard about it from a friend while taking her sister to tumbling practice. She arrived to find scores of people already filling the hospital lobby, praying urgently, though no one knew the full extent of Dang’s injuries. She said prayer was the only thing at their disposal, so that’s what they were going to do.

“You could feel the energy,” Dilonga recalls. “We were all focused on him and praying for him in the lobby and outside the entrance. We had no control over the situation, but we knew the One who had control. It was all up to Him, so we were going to pray.”

Since only one or two visitors were allowed in his room at one time, the group remained downstairs praying together or in small groups, according to Dang’s friend Katee Hennesey, a big believer in divine healing, along with her good friend Rachel Kincaid and her parents John and Paulette. Hennesey also fasted for Dang, as did many others, and they visited Dang every day as their schedules permitted, all the way until Christmas Day.

“We didn’t get a lot of answers from doctors, so we prayed out of desperation. That’s how I felt,” Hennesey says. “I fasted out of desperation. There was a constant attitude of prayer whenever we went to visit him. We just believed that prayer was a crucial part of the healing process. We felt it was vital to him staying alive.”

Unable to breathe or eat, Dang required a tracheotomy and feeding tube. He had suffered frontal brain injuries and his head was badly swollen; plus, he faced the risk of additional internal bleeding that could cause his head to swell even more. He was soon airlifted to Methodist Dallas Medical Center, where he later faced potentially fatal exploratory brain surgery, but taking no action also posed grave risks. In the end, he underwent numerous surgeries, he says, even at one point a stomach procedure because his feeding tube became infected.

Paulette Kincaid, whose daughter is Dang’s good friend and one-time Trinity Christian classmate, arrived with her husband John to find so many people in the lobby, the hospital staff occasionally asked them to step out to make room for others to enter.

Kincaid says Dang’s Vietnamese parents felt somewhat overwhelmed by all the medical information and decisions that confronted them, especially with their language barrier. Dang’s parents, however, drew encouragement from her and her husband, she says, particularly when they urged his parents not to accept the doctors’ suggestion to pull the plug.

“We suggested that we all pray that much harder,” Kincaid says. “We stated we believed that God could raise him up.”

Throughout Dang’s hospitalization, the Kincaids took charge of his spiritual environment to set an atmosphere for healing. Paulette Kincaid says although Dang’s body was hurt and his soul was quiet in a coma, his spirit was very much alive and well. Thus, they constantly played worship music in his room to connect to Dang’s spirit. Paulette also obtained healing Scriptures from the Internet in Vietnamese with English translations, and posted them around Dang’s room.

Also, she advocated that no negative talk ever occur in Dang’s presence. Too often, she says, people pray for healing but speak doubt in the next breath, such as repeating what the doctors say or citing statistics that 75 percent of patients don’t ever emerge from a coma.

Kincaid also took pains to thoroughly research Dang’s condition so everyone could specifically target their prayers, a practice she has always employed when praying for healing. Thus, she spearheaded prayer for specific neurons and neurotransmitters in Dang’s brain to reattach and much more. She printed this information along with pages of Scripture and made it available to all intercessors.

“We’d tell them this is what we’re believing, so when it happens, he will come out of his coma and have all of his memory,” she recalls. “We’d pray over his brain that way. We’d thank God and we’d hold hands and not allow people to realize their fears.”

Less than two weeks after Dang emerged from his coma, he was transferred to Cook Children’s Medical Center in Fort Worth for physical rehab, where he spent another month. After his eventual discharge, he took online courses to catch up to his class and graduated with them. He then went to Tarrant County College and today is a 22-year-old nursing major at Texas Tech University in Lubbock. His expected graduation date is December 2013.

He says he chose nursing so he can eventually work at the same children’s hospital where he rehabbed. “Being around the children and seeing what they were going through made me feel the need to help any way I could when I got out of the hospital,” Dang says.

Except for scars on his arms and head, Dang says, you would not know anything happened to him. He says he still has memory problems and struggles with his moods and decision-making because he lacks serotonin. Consequently, he suffers from depression on his down days, asking God why this had to happen; plus, he lost his opportunity for a college basketball career. He says his friends told him later that during his hospitalization, The Dallas Morning News had named him one of the top basketball prospects in Texas. Yet, on his better days, he knows it all happened for a reason, God is the answer, and that he will prevail if he perseveres.

“I know I can go to God and that He’s the only one who can get me through this,” Dang says. “I’ve learned that He is by my side through everything, even when nobody else is there. I have really felt His presence.”

Still retaining the speed he had hoped to use in college basketball, Dang is now training to make Texas Tech’s football team as a walk-on receiver or cornerback. His doctors have cleared him to play, it’s something he has always wanted to try, and he figures his chances are better for football because more roster spots exist. Considering the state he was in, Dang knows that now having a shot at sports is a miracle on its own.

“Don’t doubt God. He will always be there,” he says. “Even when you think He won’t, He is. What happened to me has been an inspiration to many.”

Hennesey is one of many who echo that sentiment.

“It was such an emotional experience for everyone, but it really shaped our faith,” she says. “It was one of those critical moments in our walk with God that’s hard going through, but something you can look back on and always know that because God helped me through this, He can get me through anything.”

Facebook
Twitter
Pinterest
WhatsApp
Previous articleFor Crying Out Loud, Why Can’t We All Still Get Along?
Next articleFreefall: Take a risk that scares you half to death