All that glitters is gold in The Palace of Versailles, France 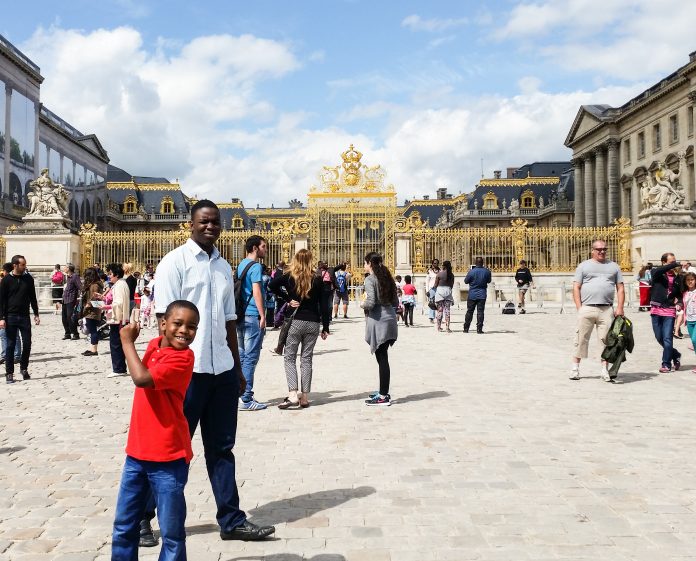 I love travelling. I really do! The sights, people, culture, food and the history of a new city always leaves me motivated and in awe of our Creator. Paris was one of the two destinations I picked to explore this past summer and I am glad I did.

Prior to leaving Dallas, TX, my sons and I mapped out the tourist attractions we wanted to visit. The Eiffel Tower was number one on the list. On getting to Paris, we learned of one of France’s most visited tourist attraction – an impressive Palace in Versailles also known as Chateau de Versailles.  We jumped at the opportunity and set out to Versailles, a 45 minute drive from the center of Paris. Nothing prepared us for the jaw dropping magnificence that greeted us. All that glittered here was gold!

The entrance into the Palace was packed with a sea of people from different parts of the world eager to see the grandeur lifestyle of the French Royal family. If you ever visit the Palace be sure to buy a fast track ticket so you can skip the lines.

Who would have thought one of the greatest palaces in the world started as a hunting lodge in 1624 for King Louis XIII of France?

His son, King Louis XIV also known as Louis the Great (Louis le Grand) or the Sun King, used his father’s hunting lodge as his summer house before transforming it into an expansive extravagant palace.

The visionary behind the Palace of Versailles –  King Louis XIV. A very successful king.

King Louis XIV made Versailles the center of France’s political power and moved there from Paris in 1682.  He moved with at least 5000 nobles and their families into the Palace to prevent them from conspiring against him. He became king at the age of 5 and reigned for 72 years and 110 days; the longest reign of any monarch of a major country in European history.

The first room toured was the Palace’s Chapel built in 1710. It was the last building constructed at Versailles under the reign of Louis XIV (son of Louis XIV). Here, he married Queen Marie-Antoinette.

The Palace Chapel has two levels. The second level was reserved for the King, the royal family and important members of the Court when they attended mass. The rest of the congregation occupied the ground floor.
The decoration on the ceiling represents the continuity between the Old and New Testament found in the Bible.

The Peer Salon below is where the Queen of France met official audiences and ladies of the Court where admitted for presentation to the queen. 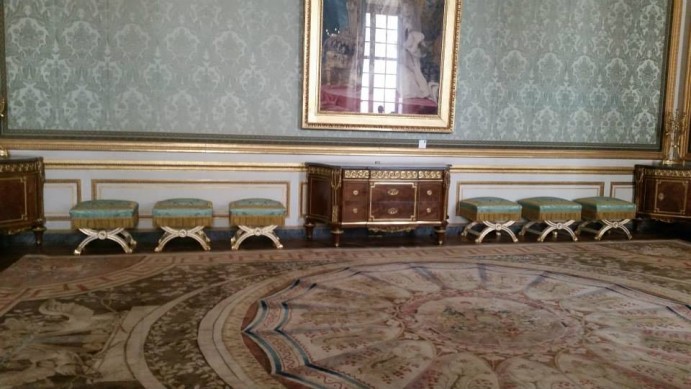 This is the Nobles Salon and the antechamber of the Grand Couvert. The King and Queen ate their daily meal around 10pm. It was a public meal so anyone could view them eating and a lot of persons did. Only the children and grandchildren of the King and Queen were allowed to share in the meal.

The Council Chamber where the State Cabinet of Louis XIV met on Sundays and Wednesdays and some Mondays.

The visionary Louis XIV’s bedchamber. Notice the beautiful decor of gold and silver brocade on a crimson ground. He died here on September 1, 1715 at 8.15 in the morning. Pardon the quality of the picture. We weren’t allowed to use flash in some of the rooms so as to preserve them.

The picture on the right is David in the Bible playing the harp. One of Louis XIV’s favorite’s painting.

This room is called the Hall of Mirrors. State functions were held here. It was initially furnished with pieces of silver but melted down in 1689 to meet the expenses of war. I cannot describe how breathtaking this room really is.

Gold lamp stands that line the wall of the Hall of Mirrors.

Below is a vintage painting of Queen Marie-Antoinette. She was born into the Austrian Habsburg dynasty in 1755. Her parents were the ruling monarch at the time in Austria.  She was known as Archduchess Maria Antonia Josepha Johanna until she married Louis-Auguste (Louis XVI) at the age of 14. He was only 15. Their marriage was arranged by their respective royal families to cement alliances. History has it she left Austria for France escorted by 57 carriages, 117 footmen and 376 horses. She became the Queen of France at the age of 19. It is sad to say that her lifestyle and ways provoked the French Revolution. She was a symbol of the excesses of the kingdom. A consort to Louis XVI, she was beheaded after he was in 1793. One of Queen Marie-Antoinette’s famous quote is “Let them eat cake ” is recorded as her reply on hearing the very poor French masses had sent a delegation to royal family about their very terrible conditions and inability to buy as little as a loaf of bread.  I guess she was not aware of anything outside her royal haven because she never knew lack.

She was not only beheaded but humiliated. They accused her of sleeping with her 8 year old son. Her famous words: “I was a queen, and you took away my crown; a wife, and you killed my husband; a mother, and you deprived me of my children. My blood alone remains: take it, but do not make me suffer long.”  The picture below is her bed chamber.

Queen Marie-Antoinette’s heavily decorated bed chamber was symmetrical with the King’s Grand Apartment. It is hard to believe all this existed in the 17th and 18th century. Her marriage bed was open to the public because producing an heir to the throne was key to the continuation of the monarchy. She gave birth before a live studio audience of over 200 people. Her overall life was a public affair, including her beheading by Guillotine at the Place De La Concorde, Paris in 1792.

A famous story about this room is that on October 6th, 1789, Queen Marie-Antoinette escaped the rioting crowds by the door to the left of the bed so she could take refugee in the King’s apartment. 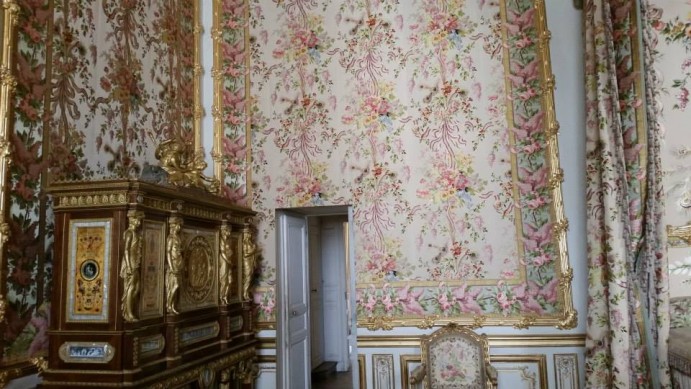 This is where the King stored his precious artifacts.

It was on the balcony of this room on October 6, 1789, that King Louis XVI, Queen Marie-Antoinette and the Dauphin (Heir to the throne) appeared before the angry crowd and were forced to leave Versailles for Paris.

A tiny portion of the garden. You need at least two or three hours to cover the gardens, fountains and pools.

By the time our tour was over, we were exhausted. The sad thing is we hadn’t even covered half of the Palace but I plan to do so in the future. I cannot get over the fact that this Palace was built in an era when there was no telephone, technology, automobile, social media, sophisticated construction machinery and all the luxuries we enjoy today. I still wonder how they accomplished so on horse backs and carriages.