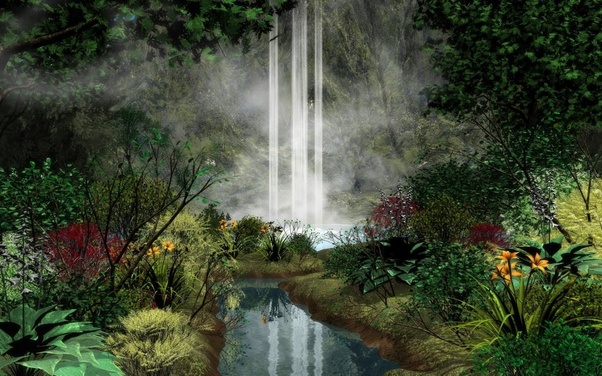 Have you ever wondered what Adam and Eve’s life was like before the fall?

Before they fell from grace and glory, dominion and power?  How and what were their lives like on a daily basis?

Imagine waking up knowing that everything you will ever need will be there whenever you want it. The fear of lack simply did not exist. The Garden of Eden had to be absolutely beautiful and breathe taking. The Holy Scriptures reveals that “God planted a Garden eastward of Eden.” In Genesis 2:5 we read these words: And every plant of the field before it was in the earth, and every herb of the field before it grew: for the LORD God had not caused it to rain upon the earth, and there was not a man to till the ground.  But there went up a mist from the earth, and watered the whole face of the ground. And the LORD God formed man of the dust of the ground, and breathed into his nostrils the breath of life; and man became a living soul. And the LORD God planted a garden eastward in Eden; and there he put the man whom he had formed.

No sin, sickness nor death, no lack or hunger — only life and eternal at that! In this place peace flowed like a river. Every morning the sun rose and would shine, giving life and causing growth as the flowers burst forth with radiant colors releasing a fragrance that filled the air for their pleasure. The very birds that Adam named would release musical notes that serenaded his ear making him reflect upon his Creator. At night the Heavens would whisper ever so softly of the glory and authority of God, the maker of both heaven and earth as the stars studded sky like diamonds twinkled against a black velvet sky.  Before the great fall the Birds sang in harmony in perfect pitch never in discord. Everything was perfect.

What did Adam and Eve loose that day in the Garden? They lost dominion over their lives, this earth and sweet fellowship/relationship with their Creator.

One thing is for sure, the tragedy that occurred that very second, moment, hour and day in the Garden of Eden has incredible affected every second, minute, hour and day of our lives too! It is a proven fact that when we eat from the same tree of the knowledge of good and evil by listening to voice of the devil we too get escorted spiritually out of the Garden of Eden. It wasn’t so much the fruit, but the root. If the fruit was good or evil, it’s the root or source of the tree, satan, that destroyed everything.

The Apostle Paul felt the chilly winds of disobedience blowing thousands of years later. In 2 Corinthians 11:3 he said:  But I fear, lest by any means, as the serpent beguiled Eve through his subtlety, so your minds should be corrupted from the simplicity that is in Christ. The key words in that scripture we must examine carefully are :as, beguiled, mind. The scripture clearly states “as the serpent beguiled Eve…”  To beguile means to intentionally deceive. Immediately the question pops up in your mind, how did the serpent beguile her? And once again the Modus Operandi, the method of operation that God’s enemy uses skillfully is uncovered for every eye to see.

The liar, the thief that cometh to hinder, kill and destroy does just that. He intentionally deceived her by causing doubt to flush her thoughts, overriding her feelings and enticing her to seize the fruit that hung from the branch of the tree of knowledge of good and evil, the forbidden tree! But thank God not for long and not forever. Praise God that the last Adam, Jesus Christ came to our rescue and redeemed our lives from destruction by crushing and destroying the power of the enemy.

When she  “saw” she  “took.” Satan convinced her through her mind to observe carefully as he mentally persuaded her to eat or disobey her Heavenly Father. Read Psalms 55:1-2 in NIV version and you too will discover your struggles day after day. It’s time for a change, don’t you agree?

You are the ONLY one through the empowerment of the Holy Spirit that can stop it. You have the POWER to stop satan in his tracks. You must allow your inner man to grow up and mature in order to stand against the enemy of your soul. Forbid the liar from instructing, or persuading you mentally! How? By recognizing his voice and forbidding him the privilege of influencing your thoughts! It’s very easy.

If you’ve ever wondered why God doesn’t simply intervene especially when satan uses people to destroy mankind or things. The answer is simply, because Man won’t step up and take his rightly place of dominance. We are created in His image but He gave us the dominion. Use it.

Today, YOU can make a difference. The first Adam lost it, but the last Adam, Jesus Christ got it back just for YOU. Resurrection Sunday is right around the corner. Today you can rise from your old ways of thinking and speaking and doing things. Just as Christ rose from the dead, you too can rise and walk in the newness of life through Jesus Christ. Thank God for the Victory!