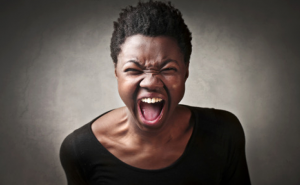 There is nothing more galling to angry people than the coolness of those on whom they wish to vent their spleen. ~ Alexandre Dumas

Have you ever faced an angry person? I’m guessing it wasn’t pleasant. There are some strategies you can use to help defuse that anger. First, however, you need to understand what anger is and where it comes from.

Anger is defined as ‘a strong feeling of annoyance, displeasure, belligerence or hostility’. Synonyms include rage, vexation, wrath, exasperation, displeasure, and irritation. That’s a pretty wide range of emotion.

Anger is a learned response to mental, emotional or environmental threats, usually modeled in the same way our parents responded to various situations. Children who grow up in an ‘angry’ family carry that anger into their adult lives. Conversely, children from peaceful families generally seek peace with others and their surroundings.

Anger is a controlling mechanism, used by the aggressor to dominate and manipulate those around him. And it is usually the ‘him’ who expresses anger in objectionable ways. Both psychologically and physiologically, men are programmed for more aggressive behavior than women (blame the testosterone!).

That said, here are some simple strategies you can use to defuse angry people.

Don’t take it personally. He that is slow to anger is better than the mighty; (Prov. 16:32) Instead, understand that their anger is not really directed at you. It was triggered by a sense of unfairness that he or she feels. When life seems out of control, their self-defense mechanism kicks in, and anger is often the result. They mistakenly think they can use hostility or belligerence to reassert control.

Consider the husband who is angry at his boss, but takes it out on his wife. He has no power to dominate his employer, so he uses his spouse to regain some sense of superiority and control. It’s not really about her; she’s a scapegoat.

Patients often exhibit anger toward family members or their caregivers when they are really upset about their inability to recover from or control the disease and their changing lifestyle. They don’t want to lose their mental or physical capabilities, and they don’t want to be in a care facility. It’s not about you at all.

Don’t respond in kind. A soft answer turns away wrath: but grievous words stir up anger. (Prov. 15:1) A yelling match won’t defuse anything. Instead, it creates a war, often one that results in long periods of unforgiveness and continued anger. The normal reaction is to try to defend yourself. “That’s not what I meant!” or “You don’t know what you’re talking about!”

Now is not the time for indignance and ire. Instead, keep your voice calm and quiet. If necessary, absent yourself from the situation until he or she has had time to calm down. It’s OK to walk away, turn off the phone or otherwise remove yourself from the anger.

Be a good listener. For his anger endures but a moment; (Ps. 30:5) Anger is normal; there are 229 verses in the KJV that refer to anger. God was often angry with the Israelites, but He did not retaliate. Instead, He considered Abraham’s and Moses’ questions, granting mercy instead of wrath. Anger is a natural human response to loss, threat, betrayal, injustice or trauma.

If the aggressor is not completely out of control, ask them why they are so upset. Often, having someone really listen while they vent can defuse the intense emotions and help them regain control. (It usually takes at least four or five “why” questions to get to the root of the issue.) Try to understand their feelings, even if you don’t agree.

Sometimes a change of topic (referred to as a ‘redirect’), works to sidetrack those intense emotions. We do it for ourselves when we walk away from the desk for a few minutes or find something else to do to change our focus. Help them do the same. Ask a question unrelated to the current flare-up. Suggest a walk to give them an outlet for that excess energy and pent-up emotion.

Be positive. And in that day thou shalt say, O LORD, I will praise thee: though You were angry with me… (Is. 12:1) As they bring themselves back under control, give them positive feedback to encourage a change in their behavior. A mature person can feel angry, without letting it control their words and actions. Help them get themselves under control by reinforcing their value and worth.

Be generous. A gift in secret pacifies anger: and a reward in the bosom strong wrath. (Prov. 21:14) There’s a reason for peace offerings and peace pipes. Gifts put people in a good mood. Do something generous for the other person. Start with a hug if they are approachable. Offer to buy them a cup of coffee. Whatever you do, make it something they will value. Put your own personal feelings aside.

Be consistent. Fathers, do not provoke or irritate or fret your children [do not be hard on them or harass them], lest they become discouraged and sullen and morose and feel inferior and frustrated. [Do not break their spirit.] (Col. 3:21 AMP) An angry person is like a child. They are out of control and don’t want to hear a lecture on their bad behavior. Like a child, however, consistent actions on your part can reinforce positive change.

Follow God’s example: God loves sinners, but He hates sin. And His mercy is new every morning. Show mercy toward him or her. Forgive seventy times seven if necessary, but don’t condone or accept their bad behavior. Show them that their behaviors can change.

Don’t be a doormat. Let all bitterness, and wrath, and anger, and clamor and evil speaking, be put away from you, with all malice: (Eph. 4:31). Yes, I know, that verse primarily refers to your own feelings; however, you should not allow yourself to remain in a constantly negative atmosphere. It may be necessary to ‘put away’ those friends who constantly bring you down. If you are in an abusive situation, get out! There is no excuse for abuse, physical, mental or emotional. Keep yourself safe.

Anger is a practiced emotion. People get angry at their computers and traffic lights, other drivers and check-out lines. All of that is practice for bigger blow-ups when bigger challenges arise. Uncontrolled anger is the devil’s tool to keep that person upset and out-of-control.

Blessed are the peacemakers: for they shall be called the children of God. (Matt. 5:9) Whenever you can, be a peacemaker. Use the above strategies to defuse angry, out-of-control people. Your calm control can help them learn to let go of the anger and regain control over their own emotions. That way, you both win.

For more information on developing life skills, better relationships, and becoming the best YOU possible, visit http://seebecksolutions.com and sign up to receive your FREE subscription to “Solutions For Success”, a weekly ezine of inspiration, motivation and humor from a Christian perspective.

Ruth Seebeck has built a reputation over the last three decades as a life-skills coach, mentor, Christian counselor and friend. She is a business owner, author, community volunteer and event coordinator whose passion is helping others overcome life’s challenges. Seebeck Solutions: Helping you make the most of What Matters Most!