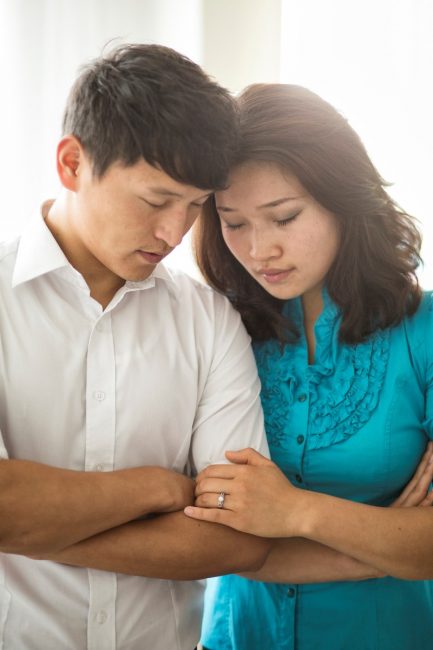 God has ordained man to be a protector, provider and give purpose to the marriage. Purpose is something that most marriages lack. We get married to have sex without a guilty conscious and little else. What’s the true point of being married? There needs to be a purpose.

Nearly every man I’ve met has a strong need to protect and provide for his family. When men do not do this, they struggle with security issues, loneliness, depression, and anxiety. The word husband comes from the word ‘band’ like a rope or strong cable that protects or keeps something from being broken into.

This no way implies that a woman is incapable. Actually, Biblically, she has less need of the man than the man has for her. But men love to be the knight in shining armor. Men love to show off. They love the concept of rescuing the damsel in distress. This merely illustrates the instincts that are built into a man.

But if a husband is not doing these things in his marriage, he struggles with feeling a part of the marriage. Dozens of marriages that I have counseled struggled because the husband became depressed over the fact that his wife, and not he, was the main provider in the home. The wife isn’t doing anything wrong by working, but he still feels this way.

Mistake #2 – An unwillingness to take responsibility:

Men don’t take responsibility because they are often immature. I think that most people agree that men tend to mature slower than the average woman. This isn’t always true, but it is true enough to be a recurring problem in marriages.

Learn to take responsibility in the marriage. Don’t pass it off to the wife or the children, or the job, or the circumstances. Don’t run off with your friends for a night out and abandoned your family in need. Don’t put the blame on your wife. Take responsibility.

If there is a problem in the marriage, face it. I’ll ask a couple that has marital problems to rate their marriage from 1 to 10-with 10 being the best and 1 being the worst. In 99 cases out of a 100, the wife will rate the marriage worse than the husband. There’s a problem and he refuses to see it, or deal with it, or take responsibility for it.

I can guarantee that more women will read this article than men. It’s an unfortunate tragedy.

Mistake #3 – Reactive instead of proactive:

Men tend to react to life and often force their wives into making the decisions rather than make difficult decisions of their own. The average woman doesn’t like a controlling husband. But that same woman doesn’t want a lump on the log for a husband either. Often, a woman’s security comes from a husband that is willing to make the hard choices in life and then to act upon it. She is secure with a loving husband that doesn’t act like a pinball machine, but has direction and purpose.

Recently, my wife and I became concerned over her some of her health issues. She knew something needed to be done but she felt insecure in making the decision unilaterally. When I finally realized the problem, and it did take some time, I told her what we were going to do. Yes, I told her. Because the decision was for her sake and she knew it. She told me that the decision made her feel loved and secure.

This goes back to that providing and protecting instinct I already mentioned. Women don’t mind a husband that makes tough decisions that protect her and provide for her.

It is true that a man makes a mistake when he doesn’t incorporate his wife’s opinion into any decision. But to make her make the decision because you are unwilling to is frustrating for most women. And just as hurtful is the husband who only makes decisions that are in his own interests. This will strip away his wife’s security. She’ll balk at a husband whose apparent only interest is himself.

Husbands tend to watch the child rearing from a distance. Then they want to tell the wife what went wrong. Not a very good plan. Don’t be the guy that runs off to work, comes home and demands that everyone leave him alone so he can relax. You may feel that you need to relax, but your children will suffer for it.

On the average, men have more influence over the children than the mother does. Children instinctually gravitate towards dad’s influence. There are many reasons for this, but just listen to a child’s bragging. He rarely ever says, ‘my mom can beat up your mom’. Instead it is, ‘my dad can beat up your dad’. Rarely does a child want to grow up to be like mom. Instead a child wants to grow up to be like dad. This goes for both boys and girls.

All this means is that in childrearing, a man can’t take a backseat. He needs to jump in and get his hands dirty. He can’t just be the angry discipliner all the time, or the guy who is seen for ten minutes a day and then hides in his room or the garage. He needs to be an active part of the children’s lives.

Spend time with your children, dad!

Mistake #5 – Failure to understand that good sex is a lifestyle not an action:

Men often treat sex as physical fulfillment only. Good sex is best when there is emotional and mental involvement. Every woman will agree with me.

Don’t get your physical satisfaction and then roll over and go to sleep. Don’t leave her empty. I read once that if a husband can get his wife to climax once out of every five times they have sex that she would be more fulfilled than the average woman. I really don’t know how true that is. But I do know that a husband ought to make every effort, and I mean every effort, to see that his wife is sexually fulfilled.

Good sex is a direct reflection of your marriage. If your sex life is a 1,2,3…ahhhh, I’m done-all the time and every time, then I can guarantee that your marriage is suffering and you may not even realize it.

Mistake #6 – Developing private worlds that exclude the wife and children:

Too many husbands build islands or foreign lands in their minds. They have Las Vegas minds in their Christian bodies. He shuts his wife out of this little fantasy world and excludes her from his thoughts and imaginations.

This is a problem. It will create all sorts of problems too. No woman can live up to your fantasy women that you have running around in your head. No woman can compete with a world that she is excluded from.

Allow your wife into all areas of your life. Dream and plan for the future with your wife. The average wife doesn’t really know her husband’s mindset. He doesn’t talk. He doesn’t tell her about his ambitions or dreams. This is a mistake, gentlemen. Your wife is part of you, there ought to be no area of your life where she isn’t welcome.

Now, she may not be interested in some of them. Like when you go out and play basketball with the guys, perhaps, but she ought to know that she can come along if she wants to.

In most Christian families, the wife is the spiritual leader rather than the husband. There is actually a good reason for this. Women, by nature, tend to be more spiritual than men do. This is evidenced by the disproportion of men to women in our Churches today.

But when the husband is the spiritual leader, he brings stability and security to the home. Spiritual guidance and leadership means that you must think of those you are leading. You must take a vested interest in the character, morality, values, and mental development of your family.

Leadership isn’t control. It isn’t being dictatorial. It is taking responsibility for the welfare of your family. The average woman will not balk at following a man who has proven that he has his wife and kids at the core of his decisions. Leadership is instilling in someone else the desire to follow. If you can’t get someone to want to follow, then you aren’t a very good leader.

Be the spiritual example in the home, Christian daddy. Read your bible, lead in prayer, and live by the morals and values that you want everyone else to live by.

Men tend to get into a rut. I know I am that way when it comes to food. I’m very picky, and could eat the same things over and over. But overall, don’t become that way. Don’t get into a routine that begins to isolate you from your family.

Women appreciate thoughtfulness in a relationship. When you put some spice back into the marriage, it overcomes many of the defects of the marriage. When you are boring and unimaginative it merely underscores the problems.

Mistake #9 – Ignorant and insensitive to the ten basic needs of a wife:

Find ways to give her each of these ten basic needs. She’ll love you for it.

Mistake #10 – failure to prepare for the Future:

And not just in a lack of foresight either. But when you fail to plan for the future of the marriage, financially, for the children, then you’ll not give your wife the security she needs.

Greg S. Baker is a Pastor, Counselor, and Author specializing in building and strengthening relationships. Visit his website at: fitlyspoken.org.