10 Interesting things to do in Milan, Italy

Visiting Milan, Italy was not on my 2015 to-do list until out of the blue, an incredible Emirates Airlines travel alert popped up on my computer screen. It was a lip-smacking round trip offer that had me exclaiming “Mama mia.” After confirming its authenticity on the airline’s website, the non-existent chance of going to Milan in 2015 reversed to a top priority.  Restlessness seized me for a few days until I bought airline tickets for me and my two sons. To sweeten the deal, the trip was going to fall around my children’s upcoming Spring break holiday. Even though our annual Summer travel was about to take place in Spring, we cared less. Milan had already staged a mesmerizing coup d’état on our eager minds.

We were looking forward to experiencing the glitz and ritz of the fashion and financial capital of Italy. Although we have visited Rome a few times, this was going to be our first trip to the northern part of Italy.

Our expectations were neatly packed in our imagination until our arrival in Malpensa Airport, Milan on March 7th. The ride from the airport into town confirmed what we already knew: Milan is mainly a business and fashion town. You cannot do a lot with your family as the city boasts of a handful of tourist sites. The good thing is we were determined to make the most of a limited situation.

For the next 9 days we explored Milan and its environs with so much zeal. Below are some of the interesting places we visited and recommend for anyone or family planning a future vacation to Milan, Italy:

Milan Cathedral, or “The Duomo“, as it’s popularly called is the fourth largest cathedral in the world. It’s a must see magnificent depiction of flamboyant Gothic architecture.

The workmanship chiseled into it for more than five centuries by numerous renowned architects is jaw dropping. Entry into The Duomo is free however, you have to pay to take pictures inside the cathedral and to get to the rooftop which is worth seeing.

This is the heartbeat of the center of Milan and the most beautiful square in Milan. Piazza del Duomo is surrounded by The Duomo, Galleria Vittorio Emanuele II and other significant buildings. A monument to King Vittorio Emanuele II, welcomes you to the square. The best time to visit is early in the morning as it tends to be very crowded. Beware of pickpockets – they have a way of blending with the crowd.

A lot of upscale stores, expensive bars and prestigious restaurants reside in this historical building. The first Prada store was opened here in 1913. If you are on a shopping mission in Milan, this is a splurging nirvana that can easily do major damage to your credit card. Otherwise, most tourists like me stroll through the Galleria and admire its enchanting spectacular architecture for free.

Hanging with pride on the northern wall of the dining hall in the Church of Santa Maria delle Grazie in Milan is “The Last Supper” – one of Leonardo Da Vinci’s most viewed painting. It’s a fifteen by twenty-nine feet religious painting of Jesus and the Apostles at the Last Supper. It is fascinating how Leonardo Da Vinci captured the emotions of the disciples after Christ dropped the shocking news that one of them would betray him before sunrise.

Fans of architecture will be delighted to see the marriage of renaissance and gothic styles in the Santa Marie delle Grazie building.

It’s advisable to book ahead or go with a tour guide so you can beat the crowd and learn a lot more.

This is one of the world’s most revered and famous opera house. It’s also Europe’s largest opera house. From the outside, the La Scala Theatre building was not as magnificent as I imagined it would be.

However, it’s interior is an opulent opera to write home about. The La Scala Museum holds a fascinating wealth of musical artefacts.  This is a must for opera lovers.

The 200 year history of many performers that have performed here including composers like Bellini and Verdi is quite humbling. You can tour the museum and certain parts of the theatre from $33.

The Sforzesco Castle is a 15th century renaissance castle built by Francesco Sforza, a member of the wealthy and noble Sforza family. It is one of the most important monuments in Milan’s history. 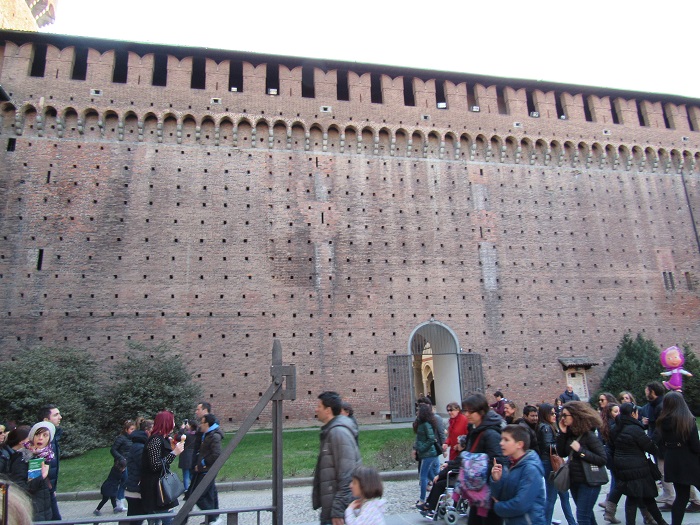 It was once one of the biggest citadels in Europe protected by over 3000 men, 12 bastons and an enormous fort. The castle has two courtyards and houses the Museums of the Castello.

The last masterpiece of Michelangelo, the unfinished sculpture – the Rondanini Pietà, (he was working on it until six days before his death) and Leonardo da Vinci’s Codex Trivulzianus manuscript are housed here. The castle is free to visit but you must pay to enter the museums.

This is a must see for any soccer or Italian architecture fan. It’s an impressive edifice that has been trodden by many celebrated football greats.

Right beside the stadium is the Museum of A.C. Milan and F.C Inter Milan. One hundred years of both soccer teams history resides here.

Take a trip to Verona, Venice, Florence or Lake Cuomo

One of the greatest things about Milan is that it’s a fantastic strategic location. You can get to so many great cities from it. A high speed train ride from Milan to Venice is around 2 hours and 10 minutes and to Florence is 1 hour 40 minutes. Book early with Rail Europe or Italia Rail to get a discounted train fare. Or you can go with a tour group.

Travel on the scenic Bernina Express from Milan to Switzerland

This was the best aspect of our trip to Milan. If you have time on your hands, you can take a bus from Milan to a little village called Tirano.

From here, you get on the Bernina Express and experience a spectacular panoramic journey into Switzerland through one of UNESCO’s World Heritage sites. I promise you will be in awe of glimmering glaciers, a breathtaking view of the Italian and Swiss Alps, glistening lakes and postcard picture Swiss villages.

The train ride from Tirano to St. Moritz, Switzerland was only 2 hours. Switzerland is very expensive. Do not plan on shopping there.

I highly recommend this trip. Be prepared to take tons of amazing pictures.

What do you expect from the fashion capital of the world? Nothing less than an array of non-stop shops competing for your wallet’s attention. There are many outlets and factory stores to choose from with discounts ranging from 30% to 70%. You can take a daily shuttle to the outlets from Milan central or arrange for a driver and personal shopper to take you.  Some of the popular outlets include Foxtown factory store, Serravalle designer outlet Fidenza Village and Vicolungo outlet.

The Milano Pass and Zani Viaggi – Milan Visitor Center are your best bet for discount dining, tours, tickets to city attractions and travel outside of Milan. They have very good English speaking tour guides too.

The tram is an affordable way to get around in the city. It is relatively cheap and worth the ride.

You cannot imagine how exhausted we were on getting back to the states. Will we do this again? The answer is a big Yes. The trip was worth the wait and price. In the future we hope to finish the unfinished things we didn’t have time to do in Milan.